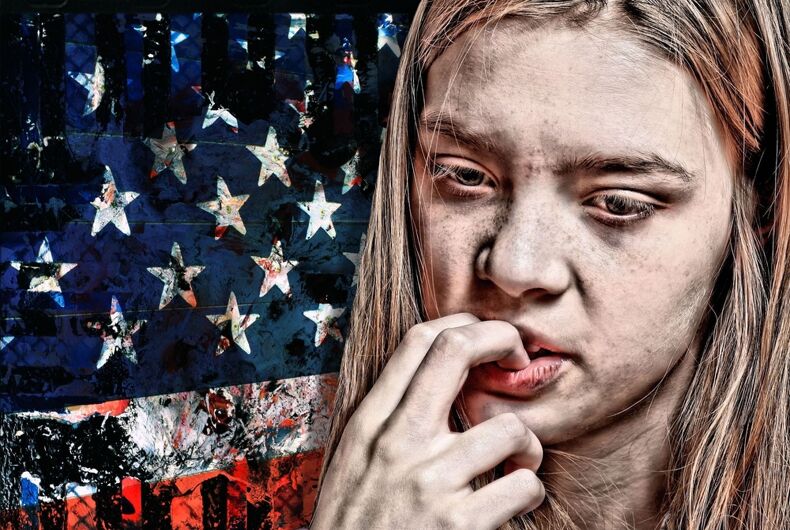 We live in times in which we witness the promotion of the promise of a mythological retro-era where white picket fences enclose all-white cookie-cutter neighborhoods; where, ironically, rugged individualism stands supreme and the easy ownership and carrying of limitless firearms is understood as an undeniable right and as a litmus test for the realization of freedom and liberty.

Where men are kings of their castles, women are their willing and loyal subordinates, and children are silent; where people of color are depicted as either gracefully and gratefully serving their master-employers, or as vicious animals bent on the destruction of the country and its good people.

When “hiring the best and the brightest” is, rather, tapping into the wealthiest and most inexperienced whose stated or hidden purpose is to eliminate the very agencies and institutions they are meant to lead.

We live in times when “protecting and defending the Constitution” is translated into turning lawful peaceful protesters into disposable deportable felons while protecting and rewarding foreign invaders of our democratic processes; where athletes, “radical Islamist terrorists,” in fact all Muslims, as well as people of color, “illegal aliens,” people with disabilities, and trans people are villainized.

When calls for “energy independence” is coded language for sustained reliance on cheap and seemingly limitless fossil fuels phrased as a source of “clean” energy in the service of corporate profits over health of the planet; when America is projected as “exceptional” and first at everything, and the remainder of the world and its people matter little.

We live in times when international allies are disparaged and abandoned, and enemies are valorized; when fascist dictators are seen of faultless role models to be emulated and honored; and when our government prematurely terminates successful agreements in the deceitful name of “preserving national security.”

When the opposition is expected to bow in respect to authority, when divide and conquer is the strategy of convenience and option of first resort, and when bullying now is referred to as obligatory essentialized masculinity.

When live in times when foreign policy is made up on the fly, and when study and preparation is tossed out in favor of winging it.

When domestic policy is interpreted as attacking and dismantling democratic institutions and all else relegated to the states to implement and fund.

We live in times when “hope” is a four-letter word, reason has entered the list of endangered species, morality has gone out the window in the name of expediency, when mediocrity is now top notch, truth is fake, and lies are alternate facts.

When persons of power and privilege position themselves as innocent and unwitting victims, when breaking and ongoing scandals and investigations are commonplace, and common decency is nowhere to be seen; where fascism is translated as popularism, and where extreme nationalism becomes patriotic.

When womanizing and admitted assaults are dismissed in the language of doublespeak as “locker-room talk” and “respect.”

We live in times when uncritical and mindless subservience to leadership becomes patriotic duty, when human and civil rights are entitlements given and taken away on a whim, and when standing and saluting are mandatory requirements for residency.

We live in times when nepotism is reframed in terms of having a strong resume, when narcissism now means serving the public good, and possessing a sociopathic personality is now seen as having the proper character and temperament credentials for the responsibilities of governing.

When up is now down and going backward is seen as progress; when corporate bankruptcies, stiffing contractors, and lawsuits and convictions of racial discrimination in housing are translated as “the art of the deal”; when America isolated and alone is called “America first”; and when selling snake oil is framed as “you will get tired of winning” because “I alone can do it.”

We live in times when spinning the truth and twisting the facts into pretzels gyrate to the point of nauseous dizziness, and when attacking the free press as “fake news” is framed as being “open and transparent.”

When “trickle down” amounts to the digestive waste of the upper echelons and “middle-class tax cuts” are, in fact, government welfare for the super-rich; when “send me your tired and poor” means your able-bodied, skilled, Christian, heterosexual, and cisgender people from Europe, but only a very few.

And when healthcare is on your own in these times of resurrecting the notion of meritocracy: that deceptive promotion that individual success or failure is totally dependent on one’s abilities, motivation, and work ethic alone regardless of personal backgrounds or social identities.

We live in times when the quest for the oval office is only for personal and professional enrichment; when throwing people under the proverbial bus is the new form of dedication, trust, and loyalty; where lies become the new truth, and hyperbole becomes reasoned statements.

When promises are not met, blame is never taken, responsibility is not accepted, and apologies are never given, though credit for successes, whether deserved or not, are always claimed.

For the times, they are a-frightnin’.

But fortunately, we simultaneously live in times when the Resistance is expanding and strengthening by the day while pushing forward joined by people of conscience and goodwill from every background and station in life, marching steadily toward the not-to-distant horizon where we will overcome and thrive in a better day yet to come!

When we convert toxic political and environmental swamps into vast pristine landscapes, where lilies of the valley cover fracking fissures and pure spring waters replace coal dust and chemical deposits, and where a replenished strong generation of living creatures and vegetation rises forever increasingly toward a deep blue sky.

When political defense packs, trade and environmental agreements, and nuclear tear-downs are honored, and where human survival and prosperity supersede constructing exclusionary walls, no matter how “beautiful.”

In time, in struggle, in unity, we the people will win the battle for a more perfect union and a more perfect world! With patience, commitment, energy, and constant vigilance, we will arrive.