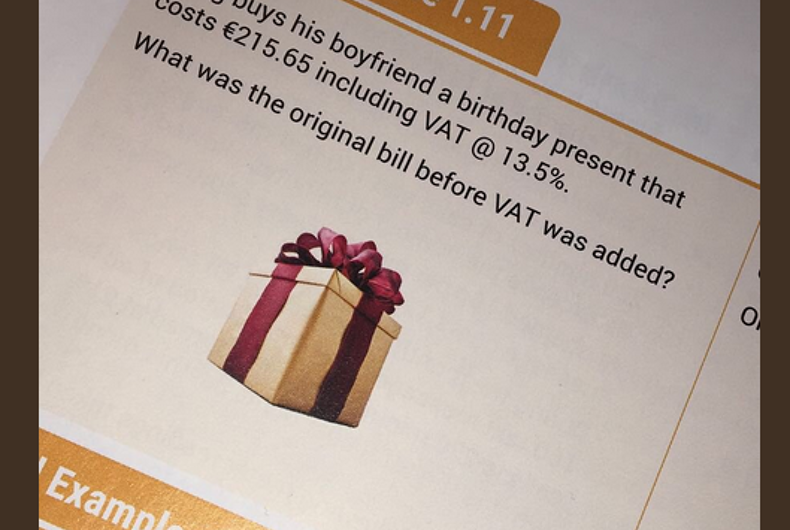 An Irish performer tweeted a math problem that has been liked thousands of times.

Paul Ryder, a semi-finalist on Ireland’s Got Talent, tweeted a math problem that a teacher friend sent him. She said she had never seen anything like it before.

Friend of mine is a teacher and just sent this to our WhatsApp group saying she’d never seen anything like it before. 🙌🏼👨‍❤️‍💋‍👨 pic.twitter.com/ZRJFmHOIRP

The problem asks students, “Craig buys his boyfriend a birthday present that costs 215.65 euro including VAT @ 13.5%. What was the original bill before VAT was added?”

This is fab. Small things like this help to unpick the heteronormative programming that our kids are subjected to on a daily basis. ❤👏

Straight people often don’t understand how much they talk about heterosexuality, even in little things like textbook math questions.

The littlest of things like these can help kids that are coming to terms with who they are. It would’ve definitely helped me to more normal in my teen years when I was realising who I am & coming out & dealing with all of the things that come with that process.

normal VAT is 23%, 13.5% is for fuel, tradespeople, couple of other things. Maybe he bought him a plumber 😀

This is just one small step on the path to a day when people can mention their same-sex partners without anyone batting an eye.

Donald Trump & his lawyer like to joke about prison rape