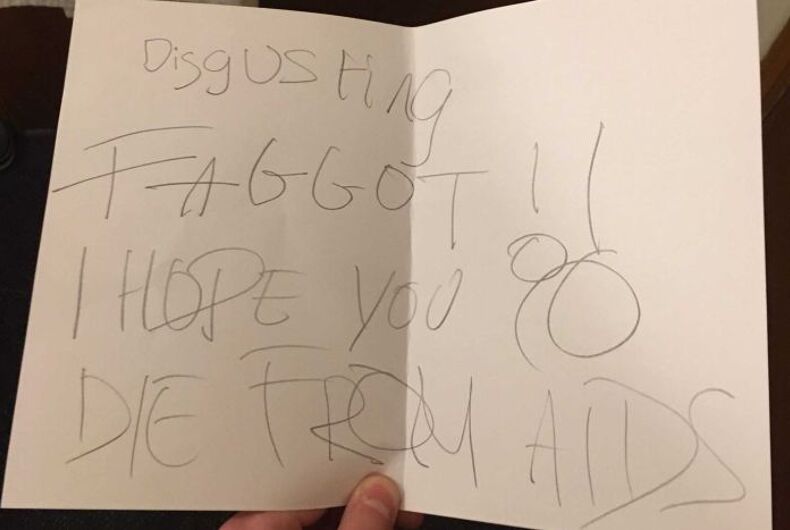 A gay student at Australia National University (ANU) received so many threatening messages that he moved out of the dorms out of fear for his safety.

The first year student, who has not been identified in the media, said that he started seeing the word “faggot” scrawled on his door shortly after he moved in. When it would be cleaned, the perpetrator would write that word again.

The student talked about the vandalism with the head of his dorm, who wrote a letter to students telling them that if the vandal was caught, they would get kicked out. But that wasn’t enough to make the harassment stop.

“I’d go to the bathroom and someone would swipe letters under my door saying ‘leave or I’ll fucking bash you,'” the student said.

“[I was] fearful. Fearful of the fact that someone was threatening me. I don’t know people’s actions.”

In addition to the vandalism, the student got hateful notes pushed under his door for a few months.

Stop being a massive faggot, and posting shit on Facebook. Your mum is a massive CUNT!! for crying. Leave you FAG!!

Disgusting FAGGOT!! I HOPE YOU DIE FROM AIDS

He started to fear for his safety, in part because he didn’t know who was leaving the hateful messages.

“The college’s response was the same: release a letter, have a little chat at dinner, nothing really fundamental,” the victim said, criticizing ANU for not taking more action to stop the harassment.

“I don’t really care if someone’s calling me a fag — words are words — but when someone’s putting out threats to me and my safety, especially at college … make a more proactive initiative.”

He then moved out of the dorm and into his then-boyfriend’s place.

“We offer an unreserved apology for any distress caused to the student as a result of the offensive behavior of another student,” the university said in a statement. “It is unacceptable to us that a student has felt victimized and harassed in their own home environment.”

“I think that first of all finding out who is doing this would be the first priority, and to remove them from the situation, as opposed to having the victim be removed,” said Matthew Mottola, the ANU student association’s queer officer.

The student, though, said that he still likes the school.

“I love this university, the university in itself I really enjoy … I don’t think [the incident] is reflective of the whole community. It’s just the fact of the matter is the onus should be on the college to fix the issue,” he said.

Is Illinois about to start teaching LGBTQ history to kids?