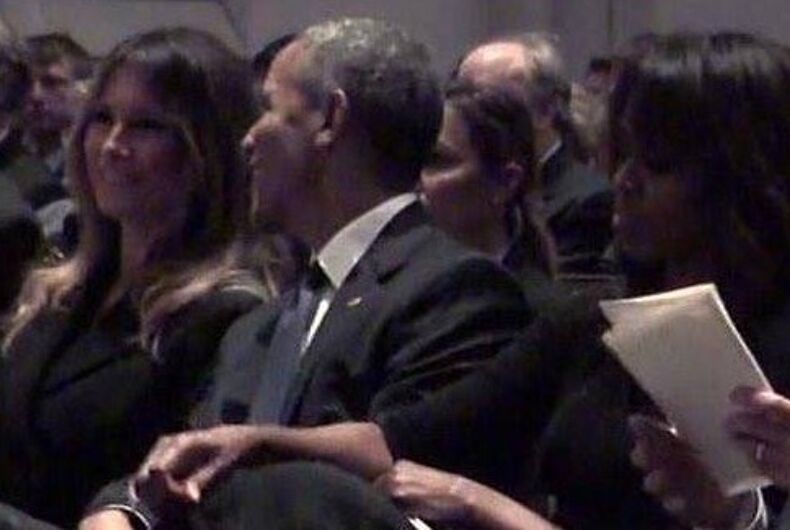 The internet exploded during former First Lady Barbara Bush’s funeral when Trump did something completely unexpected. No, not Donald. This time the one who set tongues wagging is First Lady Melania Trump.

President Trump did not attend the funeral; the administration said in a statement that he would not go “out of respect for the Bush Family and friends attending the service.” The Bush family, and Mrs. Bush in particular, have been particularly critical of Trump’s presidency and character.

The president spent the day golfing and tweeting about his former lawyer, Michael Cohen.

A normally placid and expressionless former model, Melania Trump is frequently accused of hating her symbolic role, while her husband relishes the nonstop attention. It’s also commonly accepted that she’s not very fond of Donald either.

But at Saturday’s service, the First Lady was all smiles and seemed to genuinely enjoy being the company of the man seated next to her on the pew… her husband’s obsession and worst enemy, former President Barack Obama.

Naturally, the internet went nuts with memes and jokes. Here are the best of them.

It was my honor to travel to Houston to give my respects to Barbara Bush and the remarkable life she led as a mother, wife, and fearless First Lady. My sincerest thoughts and prayers continue to be with George H.W., and the entire Bush family.

“What the hell is wrong with Melania’s mouth I’ve never seen it do that before.” — @realDonaldTrump pic.twitter.com/y0g6Ss1oOE

When Trump see that picture of Melania smiling with Obama he is gonna burn it all down. Say your good-byes now.

Poor Melania. You never see her smile. Oh no, hold on… pic.twitter.com/x5oO3RymhU

First Real Smile On Melania’s
Face In a year & a half. Must be such a relief to sit next to a real PRESIDENT🙌🏽,One who is Honest,SMILES, Cares Is SMART, Capable RESPECTS WOMEN, Whose Children❤️Animals,Who Actually WON THE PRESIDENCY,Who Is NOT TERRIFIED OF PUTIN,Who is a MAN pic.twitter.com/oebGbtUUNN

A funeral. Sitting next to the man she & her husband birthered.

Yet it’s the 1st smile on her in years. In older photos she’s ALWAYS smiling.

Obama is a funny guy, but that’s a woman craving distance from a monster being reminded what dignity looks like.

This is Melania and Obama sitting together today at former First Lady Barbara Bush's funeral. Have you ever, ever, EVER seen Melania smile like this, and look this relaxed, beside her own husband? Ever? pic.twitter.com/9qYLT2glIH