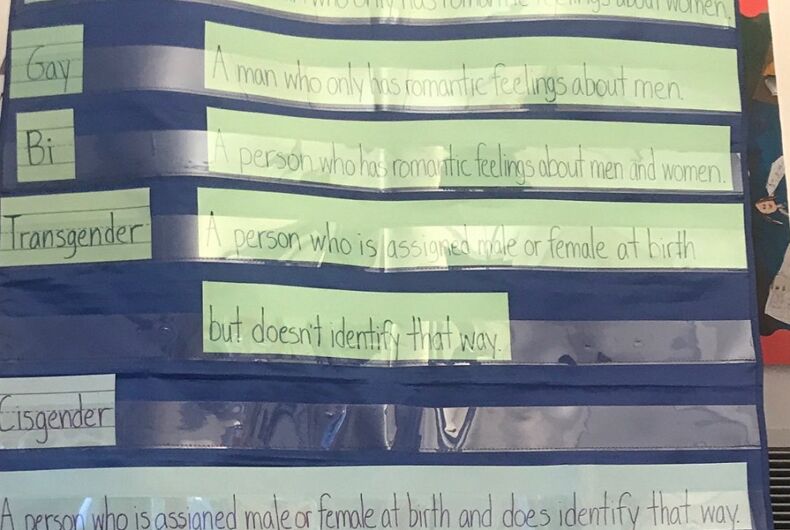 Feminist writer Jessica Valenti shared a lesson that her second-grade daughter got at school.

Valenti posted a picture of a chart that explains basic LGBTQ vocabulary, like “gay,” “bisexual,” “transgender,” and “cisgender.”

“To the folks who find LGBTQ language ‘confusing’: If my daughter’s second grade class gets it, so can you,” Valenti wrote.

Sure, some of those words are referring to ideas that are somewhat more complicated than the definitions given, but the chart is accurate enough.

Of course, lots of people on Twitter didn’t like the idea of kids learning vocabulary for sexual orientation and gender identity.

2nd grade? Honestly, for kids, that’s inappropriate & should not be celebrated. A basic understanding in human development would indicate that kids at that age don’t understand basic activities for daily living, let alone experiment with sex.

I agree totally, wtf is wrong wth the school systems that they think this ok? ITS NOT

I believe the teacher of this class should be arrested for child abuse.

Because fucking around with something as profoundly important as instinctual sexual development through artificial manipulation according to a fashionable ideology can be profoundly destructive to society.

Some people tried to explain that kids are already being inundated with heterosexuality, so what’s the problem with learning a few words to describe people who are already around them, or maybe themselves?

I fully agree. Kids in second grade have already been exposed to lots of words and certainly to people in relationships. They ought to know what those words mean.

And some people just made fun of the haters.

Yes, indoctrination goes too far, they really should not have put on that part about how everyone has to be gay

That said, there were a lot of people who didn’t like Valenti’s original tweet, and it looks like a lot of them are straight people who consider themselves LGBTQ-friendly.

Kids that age already have a sense of their gender identity. Some kids are gender non-conforming and are already learning at home, in the media, and at school that there’s something wrong with who they are. Some of them might even know that they’re different from the other kids or that they’re attracted to people of the same sex.

And a lot of them already have LGBTQ relatives, friends, and neighbors in their lives.

When a five-year-old boy kisses a girl, it’s puppy love. When heterosexual parents tell their kids how they met, it’s a touching connection between generations. When a child sees a movie where a prince woos a princess, it’s age-appropriate.

Make any of those things queer, and suddenly we’re talking about child abuse and pornography. There’s just something about queerness that makes straight people’s heads explode.

No, Chick-fil-A isn’t ‘infiltrating’ New York City, it’s opening stores there. Get over it.

Phoenix is latest metropolis to get LGBTQ pride rainbow crosswalks