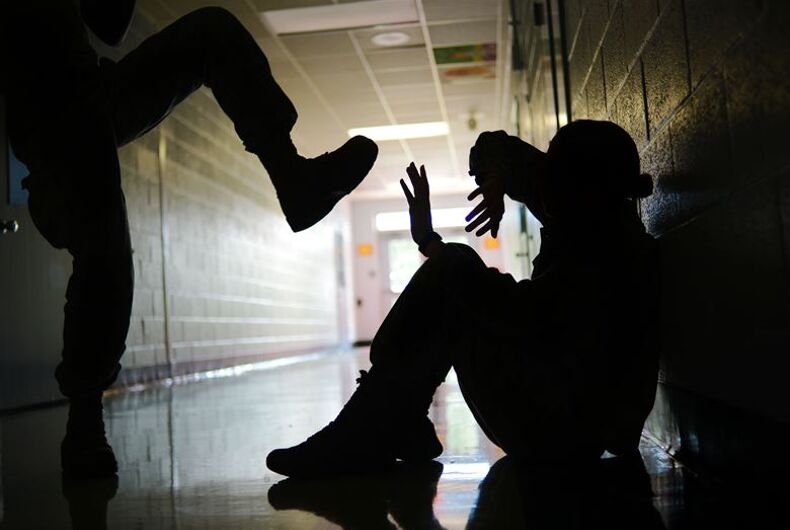 An Oklahoma middle-school student has been cited for assault after an incident in which a gay student was slammed into his locker.

KFOR TV reports that school officials are investigating the attack at Highland West Middle School, in Moore, just south of Oklahoma City. The bullying attack was captured on phone video.

The parents of both boys are defending their sons as bullying victims.

“Your heart sinks. You feel for him,” said Chad Presley, whose son was hit. “It’s one of the most painful things, as a parent, to go through.”

Rachael Clymer’s son, who was cited for the attack, is autistic, and she said that he, too, had been the victim of bullying. She shared a video of it with KFOR TV.

“The kid called him a rapist, and basically my son just snapped,” Clymer said. “It’s not OK that he physically snapped, but he didn’t just go to the school and walk up to the kid and hit this child for no reason. He had been verbally attacked for months.”

Clymer’s son has three family members who are gay and would not target someone for sexuality, she said.

However, Blake’s mother, Brandy Miner, said the school had been hesitant to take action because Clymer’s son was in an individualized education program.

“It shouldn’t matter what the child — whether you have IEP or anything — there should be zero tolerance for that, Miner said.

This incident follows reports of two other sexual assaults in Moore schools in 2018, The Oklahoman reports.

The principal at Moore’s Central Junior High was alerted Jan. 19 of a sexual assault inside a school locker room on Jan. 14. Also on Jan. 19, coaches at Southmoore High School were notified that a sexual assault had taken place inside a wrestling room.

Just south of Moore, in Norman, four high-school wrestlers were charged in connection with a Jan. 9 rape of two teammates assaulted with an instrument on a bus.