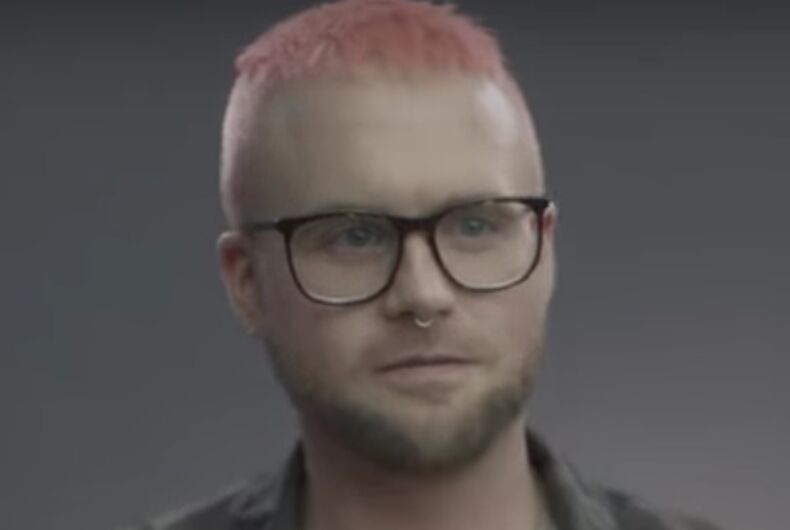 A gay man from Canada has come forward with proof that a firm stole personal data from 50 million Facebook users in order to help get Donald Trump elected.

Christopher Wylie explained that he worked with Cambridge University professor Aleksandr Kogan to steal user information from Facebook. They created a personality test, and, at the end, users could click to give access to their profiles for “for academic purposes.” Kogan then took their information and the information of all of their friends.

About 320,000 people took the quiz and gave access to their profiles. But with an average of 160 friends each, Kogan obtained data from over 50 million users.

“We exploited Facebook to harvest millions of people’s profiles,” Wylie said. “And built models to exploit what we knew about them and target their inner demons.”

That data would eventually be used to micro-target voters with online advertising that primed them to vote for Trump.

Wylie was interested in politics and advocacy at a young age. When he was 14, he successfully sued the British Columbia Ministry of Education and forced them to make their policies around bullying more inclusive.

He was an intern in the Canadian parliament, and, when he went to college in London, he worked for the Liberal Democrats to upgrade their databases and voter targeting efforts.

In 2013, Wylie was working on a PhD in fashion forecasting and looking at ways to identify potential liberal voters in the UK by looking for correlations in data.

A paper published that year showed that basic personality traits – openness, conscientiousness, extroversion, agreeableness, and neuroticism – could be linked to political behavior.

Wylie was interested in developing the connection, and he was introduced to the CEO of SCL Elections, Alexander Nix. The two flew to New York to meet Brietbart editor and Trump adviser Steve Bannon and hedge fund billionaire Robert Mercer.

They met at Mercer’s daughter Rebekah’s apartment, and the conservative operatives loved that Wylie is gay.

“She loved me,” Wylie told the Guardian. “She was like, ‘Oh we need more of your type on our side!’”

She meant gay people. “The gays. She loved the gays.”

Wylie says that Bannon was also. “So did Steve. He saw us as early adopters. He figured, if you can get the gays on board, everyone else will follow. It’s why he was so into the whole Milo thing.”

Together, they would start Cambridge Analytica. Since they needed to get their hands on millions of user profiles, they hired Global Science Research (GSR), a firm owned by Cambridge professor Aleksandr Kogan, to use his academic credentials to get them Facebook data.

(Nix denied working with GSR in a Parliamentary investigation into the role Cambridge Analytica played in the Brexit vote, but Wylie provided the Guardian with a copy of the contract and bank records that showed wire transfers.)

They set up a survey and had users click to give access to their profiles, and with that access, Cambridge Analytica got into their friends’ accounts as well.

The huge breach of personal information was against Facebook’s privacy policy since it wasn’t being used for academic purposes. The breach was possibly a felony under British data protection law, but Facebook did little to stop it.

Facebook’s “security protocols were triggered because Kogan’s apps were pulling this enormous amount of data, but apparently Kogan told them it was for academic use,” Wylie explained. “So they were like, ‘Fine.’”

In 2015, the Guardian ran its first report about Cambridge Analytica (which was helping GOP candidate Ted Cruz at the time), and Facebook only responded by sending a letter.

Two years after the breach and after Wylie was no longer working for Cambridge Analytica in late 2016, Facebook sent a letter to Wylie telling him that the data was obtained illegally and that he must destroy it.

“Literally all I had to do was tick a box and sign it and send it back, and that was it,” he said. “Facebook made zero effort to get the data back.”

Cambridge Analytica would go on to work with the Trump campaign and Lukoil, a Russian petroleum company with ties to Vladimir Putin.

Now the former anti-bullying advocate says that what Cambridge Analytica did is worse than bullying. “Because people don’t necessarily know it’s being done to them. At least bullying respects the agency of people because they know. So it’s worse, because if you do not respect the agency of people, anything that you’re doing after that point is not conducive to a democracy. And fundamentally, information warfare is not conducive to democracy.”

He says he feels “a sense of regret every day when I see where they have helped take our world.”

Suspended by @facebook. For blowing the whistle. On something they have known privately for 2 years. pic.twitter.com/iSu6VwqUdG