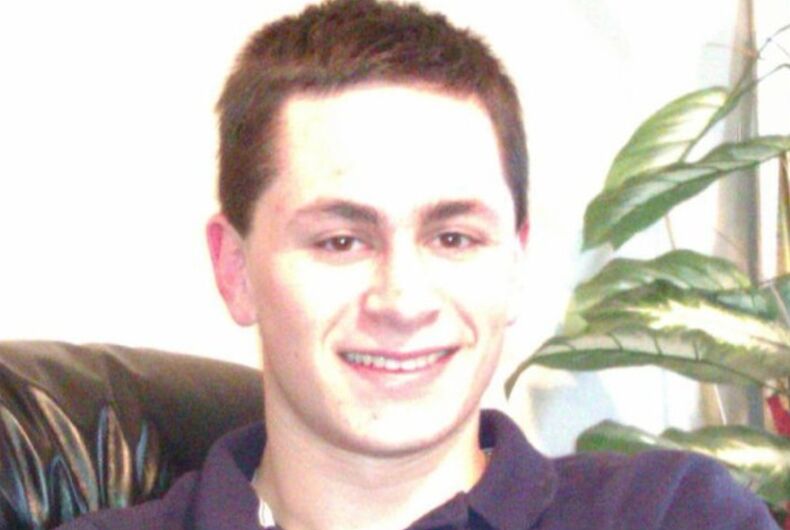 Mark Anthony Conditt, believed to be responsible for a spate of bombings in Austin that left two dead and many more injuredPhoto: Facebook

Police have identified Mark Anthony Conditt, 23, as the suspected Austin bomber, who terrorized the city for weeks, leaving two dead and several injured, as the result of four separate attacks. He blew himself up in his car today as police closed in.

Writings believed to come from Conditt show him to have been a conservative who had anti-gay views.

A blog has been discovered that appears to have been written by Conditt as part of a government class project at Austin Community College. It lists the writer as Mark Conditt of Pflugerville, Texas, where the suspect lived.

NBC confirmed public records show only one Mark Conditt in Pflugerville, and Austin Community College confirmed that a “Mark Anthony Conditt,” born in June 1994, was a student from 2010-2012, the year the blog was published, but adding he failed to graduate.

The blog, which has six entries in all, includes a post titled, “Why gay marriage should be illegal” in which the writer argues:

The other posts published to the blog, called “Defining My Stance,” include one on the shutdown of the site Megaupload on copyright infringement grounds, an argument against offering Majid Khan a plea deal to be released from Guantanamo Bay, opposition to free abortions, a proposal to do away with the sex offender registry, and one supporting the death penalty that is particularly interesting to read in hindsight.

His post on the death penalty is in response to an article by Tod Robberson, a writer from the Dallas Morning News, who argued the execution of George Rivas helped make the case against the state executing people, as he expressed his desire to be executed instead of imprisoned for life, calling it “freedom.”

First, the whole premise that Rivas welcomed death is outright wrong.  If he had wanted or wished for death, he would have just shot himself, like his fellow Texas 7 escapee, Larry Harper, who committed suicide, rather than be captured and re-incarcerated.  Instead, for 11 years he chose life by surrendering, instead.  He fought against death during his trial. He fought against death with his appeals and asked to have his sentence commuted from death to life.  None of these are the actions of a person willing to chose death/freedom over life.

Second, Living criminals harm and murder, again – executed ones do not.  Rivas was a known murderer, and had escaped prison once.  If he had gotten life without parole, he could have escaped again.

Conditt describes himself in the bio of his blog as enjoying “cycling, parkour, tennis, reading, and listening to music.”

“I am not that politically inclined,” he continued. “I view myself as a conservative, but I don’t think I have enough information to defend my stance as well as it should be defended. The reasons I am taking this class is because I want to understand the US government, and I hope that it will help me clarify my stance, and then defend it.”

Austin Community College told NBC it is “working with Austin Police Department to provide any information they need.”

If Tony Perkins wants to know who’s discouraging evangelicals, he should look in a mirror