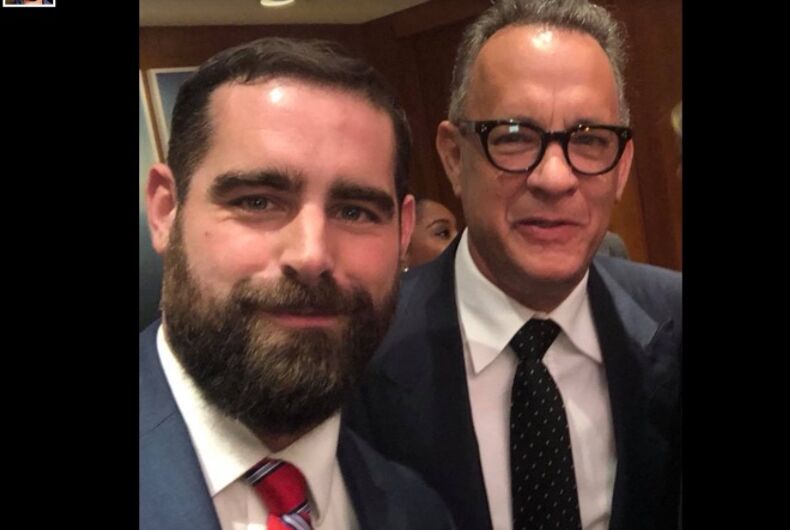 The groundbreaking 1993 film “Philadelphia” inspired a generation of gays and allies. Among them was Brian Sims, then a 15-year-old living in the Philly suburbs.

“I had just begun to realize I was a gay man, and at that age was already a few years into telling people I wanted to be a ‘feminist lawyer’ when I got older,” the 39-year-old Sims, the now-out Pennsylvania Rep. Brian Sims, posted on Facebook Feb. 12.

In the post, Sims wrote a heartfelt thank you and shared a selfie with “Philadelphia” star Tom Hanks. Hanks won an Academy Award for best actor for his portrayal of lawyer Andrew Beckett, fired from his law firm while battling the disease.

Then, just happening to join the conversation with Sims and Hanks was former president Barack Obama. Sims was attending the unveiling of the official portraits of the former president and former First Lady Michelle Obama at the National Portrait Gallery. Sims posted a selfie with Michelle and a video of the unveiling.

“In the middle of speaking with [Hanks], President Obama approached the two of us and upon hearing the conversation, told Mr. Hanks that I am a gay man representing Philly, to which he simply responded, ‘Oh yeah, I know’,” Sims wrote on Facebook as he shared the selfie. “So I don’t really know where to go from here…”

“Philadelphia” was the first big-budget film on AIDS. Hanks’ co-star was Denzel Washington, who played the attorney that represented Hanks’ character, at first reluctantly but then robustly. The movie also won Bruce Springsteen the Academy Award for best original song, “Streets of Philadelphia.” Joining Hanks and Washington in the cast were Jason Robards, Antonio Banderas and Mary Steenburgen.

Sims represents Philadelphia County in the Pennsylvania House of Representatives and has been a regular target for conservative Republicans since his election. In May 2017, he was hit with a state ethics probe into his speaking fees. Sims refuted the claim and called it a hit job.

In the Facebook post, he wrote about the film’s profound influence upon him as he began his career.

“When I moved into the city 10 years later to actually practice law,” Sims wrote, “everything about the film resonated with me, and I’ll never forget the scene where Andrew Beckett lifts his shirt on the witness stand to reveal the lesions that covered his body.”

A SINCERE THANK YOU! The movie “Philadelphia,” about the life and death of a gay attorney with HIV/AIDS battling…