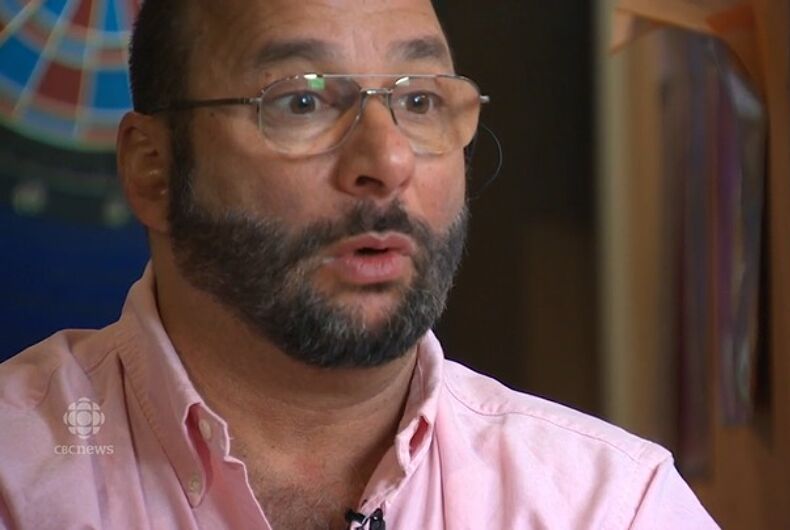 Alleged Toronto serial killer Bruce McArthur is being charged with the murders of five men, and had another restrained in his apartment at the time of his arrest. An acquaintance, Peter Sgromo, tells a harrowing story of how he could have become another one of the man’s victims.

Sgromo met McArthur over a decade ago in a support group for gay fathers. They remained friendly and would run into each other from time to time. Last spring, McArthur reached out to Sgromo on the app Bear411, suggesting a meetup.

They met up at O’Gradys Restaurant, and had what Sgromo remembered as a casual and relaxed conversation that included talk of business and travel.

“We had no exchange about anything that would suggest that we were going on a sexual date or anything like that,” he told CBC. But he did recall McArthur talking about a guy he met in Italy who “liked it really rough.”

McArthur’s Scruff dating app profile also said he liked to find a guy’s “buttons and then push them to your limits.” Sgromo said he was not aware of that information in the profile when he agreed to go out with McArthur, and that he did not think it was going to result in a sexual encounter.

The situation turns sexual, then violent

The men left the restaurant and walked back to McArthur’s van, where Sgromo hugged him, gave him a peck, and said goodbye. That turned into consensual kissing, and then they were in the back of McArthur’s van after he suggested giving Sgromo a ride back to his hotel.

It was inside the emptied out van that things took a violent turn.

“He really grabbed my neck, violently twisted it, right to his crotch and his pants were undone. That’s when I really was quite disturbed,” Sgromo said.

“I have an 18-inch neck. My neck is big, and for him to grab my neck with one hand, twist it like that, I literally thought one more second he would have snapped and broken my neck, and I was a dead man,” he added.

Sgromo said he had experienced violent sexual encounters before, prompting him to take martial arts classes. He used those instincts, grabbing McArthur by the elbow, on the “funny bone,” while asking him what he was doing.

When he got free, McArthur said he wanted to take him back to his house, but Sgromo said he needed to stop by the hotel first to check on his sick dog. When he got up to his room he texted McArthur to tell him his dog was too sick for him to go out.

A friend of Sgromo’s told CBC that he told him about the incident shortly after it happened, and brought it up again when the news hit of McArthur’s alleged killing spree.

McArthur is said to have had a sexual relationship with one of the five men for whom he has so far been charged with killing. Officials say more charges are expected, as they continue to search properties connected to the 66 year-old landscaper.

The CBC’s report follows, with Sgromo’s part starting around the 1:30 mark.

Bruce McArthur had a creepy profile on Scruff that is still accessible. pic.twitter.com/KHQGzA8wWs