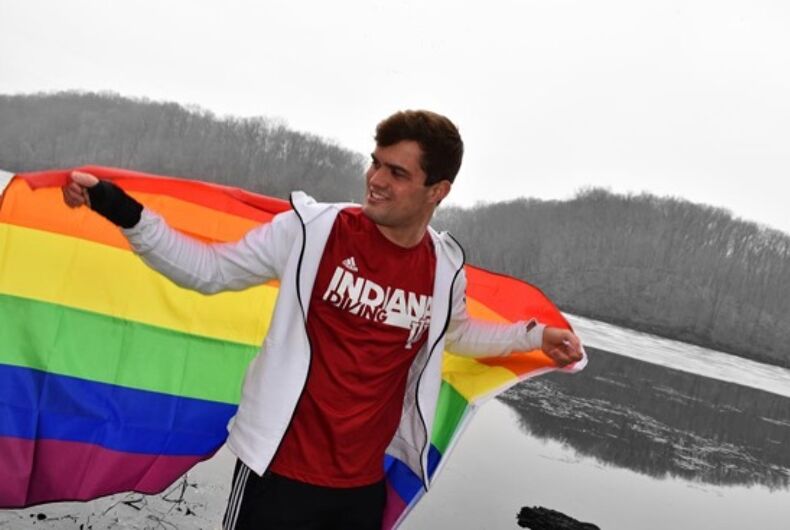 The team ranks third in NCAA Division I, and competing in three Big Ten events is junior Clark Carter, who’s being recognized as IU’s first gay athlete out nationally.

“I’ve been publicly out for almost a year now,” Carter said to LGBTQ Nation, “and my support network of teammates, friends and family have all been there for me.”

Carter said he came out to his teammates last year at the University of Wisconsin, before he transferred to IU’s program for a better coaching fit. His coming-out story went national with coverage in Outsports on Feb. 20.

How has that gone? “Nothing but positive responses,” Carter told LGBTQ Nation.

“The announcement hasn’t affected practice or performance much, actually,” he said. “The thing that matters most was that I’ve accepted myself for my sexuality long before I made the announcement.

“That’s been the key thing that’s made my life more comfortable, and therefore my performance has increased.”

In high school, at Creighton Prep in Omaha, Nebraska, it was tough to wrestle with his sexuality, he said.

“I spent so much time hiding it that I would be much more frustrated about everything in life, which also got in the way of my life as an athlete,” Carter said. “I was very bad at controlling my emotions and keeping calm as a result of keeping it to myself.”

In sports, the Bloomington campus is better known for men’s basketball. But it’s also known for the late Alfred Kinsey, the groundbreaking sex educator and researcher, and the institute that bears his name.

Kinsey’s historic books on male sexuality in 1948 and female sexuality in 1953 helped a generation of LGBTQ people realize they were not alone. He estimated that 10 percent of American males were homosexual, and the famous Kinsey scale rated homosexual attraction on a 0-to-6 scale.

But beyond basketball and Kinsey, IU’s swimming and diving program also has a storied history. Nine-time Olympic champion Mark Spitz swam there, as have dozens of all-America swimmers. IU has won six national titles and 24 Big Ten championships.

Carter and his teammates are on their quest for the 25th conference title. Through the weekend, he’ll compete in the 1m, 3m and platform diving events.

A sign of changing times, Carter told LGBTQ Nation that he was able to come out on his own terms. “I didn’t feel the need to get coaches or administration involved because coming out is becoming more and more accepted.”

Are these recent wins the beginning of a Blue Wave for 2018?