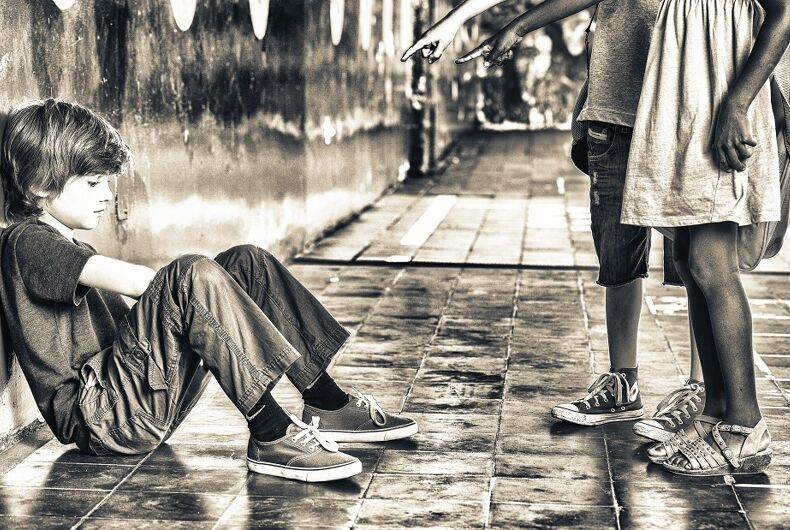 A mother wrote about how her 11-year-old son’s best friend ended their relationship.

Writer Lori Duron says that her son C.J. had been friends with “Allie” for years. While he was never stereotypically masculine – he likes make-up and talks about cute boys – he and Allie got along.

Several weeks ago, Allie got in trouble with her parents for reading Duron’s blog, which discusses gender non-conformity. A few days later, she went to C.J.’s birthday party, and there were some gay people there. C.J. mentioned wanting to go to Pride.

It all came to a head a few days ago, and, while driving him home from school, C.J. told Duron, “She just said it. She said her family doesn’t hang out with gay people, so she can’t hang out with me. She says I’m the only gay person she knows, and she doesn’t want to know me. She says that all of our friends will be her friends now because she is more popular than I am.”

He asked a lot of “unanswerable” questions:

“Do they hate gay people?”

“If people are friends with me, can they still be popular?”

“Who will I sit with at lunch?”

“Who will I play with at recess?”

“Why do people hate people for something they can’t change?”

While Duron doesn’t know exactly what led Allie to end their friendship, it’s clear that at some point she was taught to hate.

The break-up led to a lot of pain and a lot of tears, and it also got Duron to think about how millions of LGBTQ people have had to endure the pain of being targeted and scorned, often from a really young age, and what that can do to them.

At times, C.J. was inconsolable. I watched him shivering on the couch and struggling to catch his breath between sobs. This is one of the reasons why some LGBTQ and gender-expansive kids kill themselves. This is why some of them sink into depression, turn to drugs, drop out of school and participate in unsafe sexual situations. This is why some mothers with children like mine find their arms empty one day.

I worry that C.J. can’t take this kind of pain and rejection for years on end. He can’t have nights like this multiplied by seven more years of school and an infinite number of classmates who will hate him for who he loves and what he wears.

At least C.J. has awesome parents. I’m sure a lot of us don’t need to imagine what it’s like to worry about homophobia while having to hide all signs that something is wrong from your parents.

In historic first, Gus Kenworthy kisses his boyfriend at the Olympics on TV