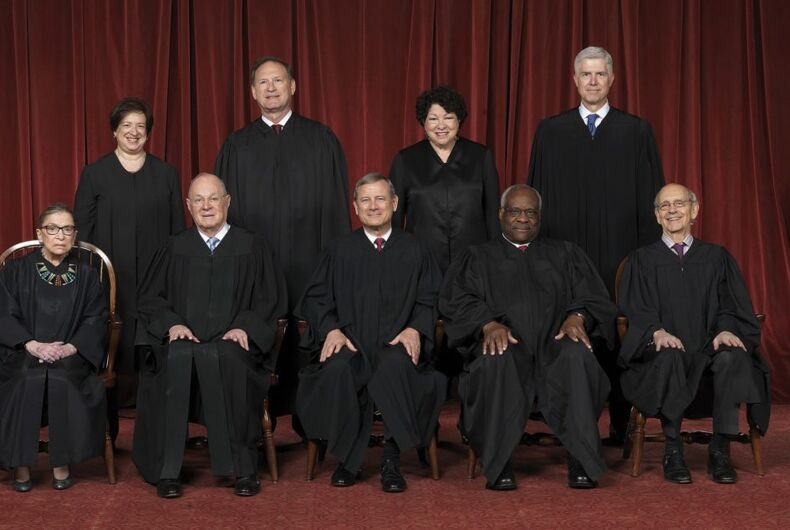 The U.S. Supreme Court has decided to allow Mississippi’s anti-LGBTQ “religious freedom” law to stand by refusing to hear a challenge, letting a lower court’s ruling in favor of it stand.

The law, HB 1523, or the Protecting Freedom of Conscience from Government Discrimination Act, was signed by Republican Governor Phillip Bryant in 2016, with backing from Christian activists and in response to the Supreme Court’s ruling in favor of marriage equality. It allows businesses and government employees to refuse to serve the LGBTQ community if it conflicts with their religious beliefs.

The justices left in place a ruling by the New Orleans-based 5th U.S. Circuit Court of Appeals that found the plaintiffs, including same-sex couples, civil rights groups, and a church, did not have legal standing to bring the suit, Reuters reports.

The law has yet to be implemented and more legal challenges are expected, even after this decision. If the law is put into place, someone who is then turned away due to their LGBTQ status might have more legal standing to bring a discrimination suit.

“We will keep fighting in Mississippi until we overturn this harmful law, and in any state where antigay legislators pass laws to roll back LGBT civil rights,” said Beth Littrell, a lawyer with Lambda Legal.

The law “protects” those who believe that marriage should only be between one man and one woman, that any sex (yes, straight sex included) outside of that kind of marriage is improper, and that gender is based on what someone is assigned at birth, not their gender identity.

A federal judge in Mississippi blocked the law in 2016, arguing that it allowed for “arbitrary discrimination,” but the 5th U.S. Circuit Court of Appeals overturned that ruling.

“While freedom of religion is a fundamental right, it should never give people the right to impose their belief on others and openly discriminate against others in the name of religious exemptions.”

The Supreme Court is also deciding a case involving a Colorado baker, Jack Phillips, who is claiming that if he is made to make cakes for same-sex weddings it would be in violation of his First Amendment rights.

Christian Conservative legal group Alliance Defending Freedom is representing both Phillips and the state of Mississippi in the two cases.

“Good laws like Mississippi’s protect freedom and harm no one,” claimed Kevin Theriot, an attorney for the group.

It’s hard to imagine how you could make such a statement unless you don’t count LGBTQ people as real people who are deserving of rights.

Did the FBI force a ‘confession’ from the Pulse shooter’s widow?