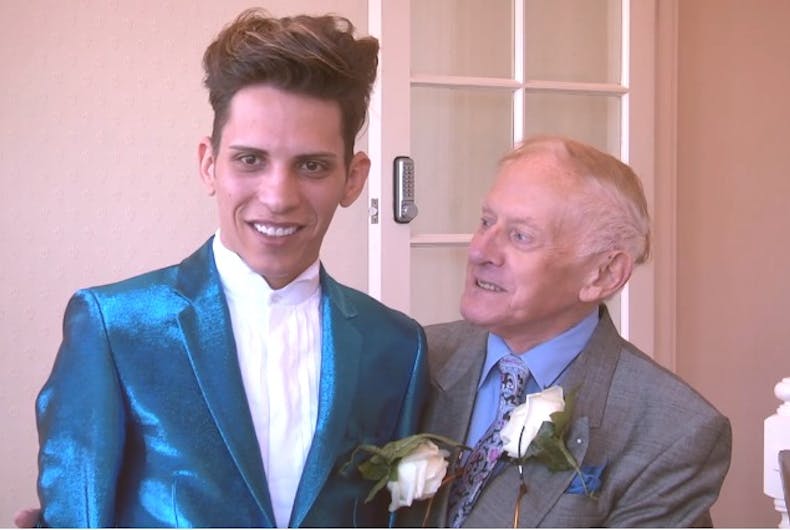 A 79 year-old retired priest has been left heartbroken and homeless after his 24 year-old husband left him just after their home was put into his name.

Philip Clements met male model Florin Marin on a dating site and before long were saying, “I do” in a rather bizarre ceremony (see below).

Clements sold his home in Kent, in England, for £214,750, before moving to Romania and purchasing an apartment for the couple to live in in Bucharest. He signed over the property to Marin, so that he would have security after he passed away.

The couple began having arguments, as Marin would spend at least a couple nights out clubbing each week, returning home late and getting mad if Clements accidentally woke him up during the day. Clements was told he was too old to join in the clubbing.

Marin broke things off just weeks after the apartment was put in his name, and Clements found himself homeless and relying on friends to put him up. He regrets turning over the property to his sugar baby.

But he still seems not to be ready to blame Marin for his callous and blatantly gold digging behavior.

He is still hoping there is a chance for a reconciliation.

So much for learning from one’s mistakes.

Marin has already found a new man, Jeronimo Jesus de Vega, 48, who pounced when he learned that the 24 year-old had split with Clements.

While Marin claimed Clements knew about his new man, Clements said he was unaware.

“I wasn’t aware of it. Unless it’s the Spanish man who works with him on TV,” he said.

“I will ask Florin if he has gone behind my back.”