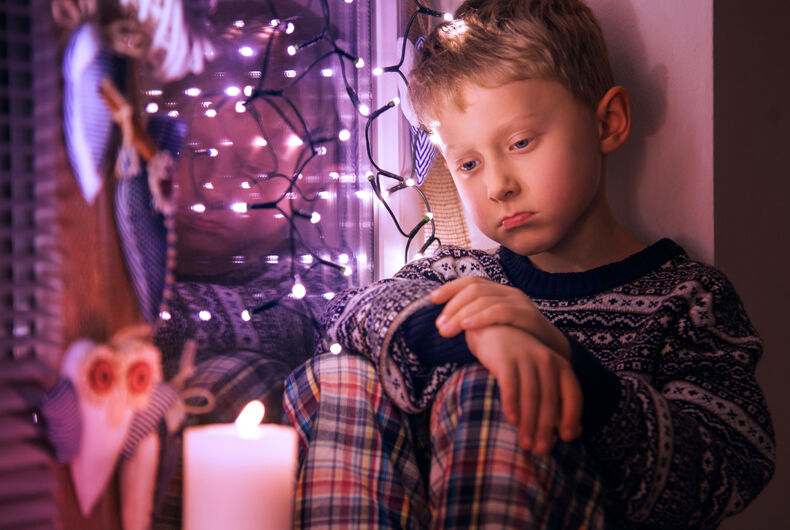 Pastor Dave Grisham from Last Frontier Evangelism is the type of guy who gives out Bible tracts at Halloween. So is it any surprise the thoughtless jerk decided to ruin Christmas for a bunch of little kids?

Grisham was hell bent on saving the little kiddies’ souls, so he packed up and headed to his local mall to share the “good word”: There is no Santa Claus.

“We’re going to tell the children here today the truth: that there is no Santa Claus and Christmas is about Jesus Christ,” Grisham says into the camera before starting his tirade at Santa’s Village.

“Jesus died on the cross to pay for their sins, and Jesus was born in a manger 2,016 years ago. So here we go. We’re gonna tell ’em the truth.”

Grisham walks around the line of kids with their parents trying to break as many hearts as possible.

“Folks, my name is Pastor David,” he says. “I wanted to tell you today that there is no such thing as Santa Claus. Santa Claus does not exist. The Christmas Season is about Jesus.”

“The man you’re gonna see today is just a man in a suit dressed up like Santa, but Santa does not exist. And parents, y’all need to stop lying to your children and telling them that Santa Claus is real when in fact he’s not.”

While some of the parents can be heard telling the man to pipe down and go away, things get tense when one father steps forward to confront the not-so-merry minister – especially when other parents join him.

Watch and tell us what you’d do if some crazy religious right nutjob tried to spoil your kid’s holiday.

Ok what do you think of this mans behaviour?

Ok what do you think of this mans behaviour?Preacher ruins Christmas as children wait to see Santa.Via ViralHog