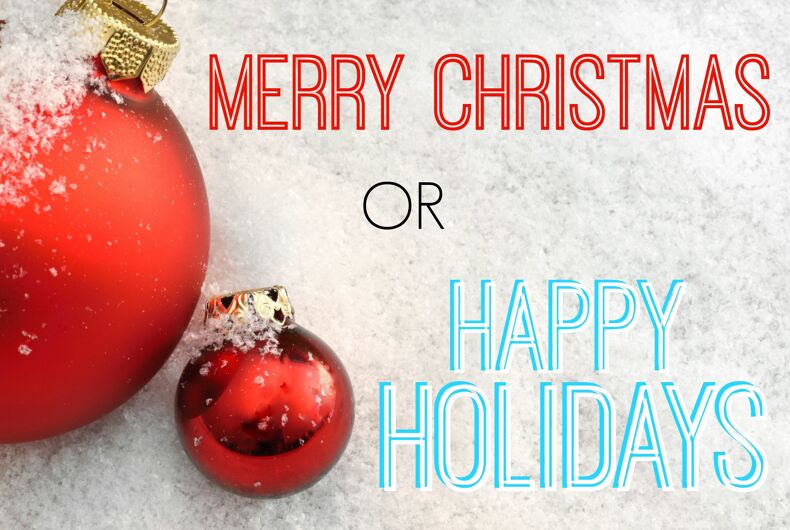 Do you say "happy holidays" or "Merry Christmas"?

Complaining about the War on Christmas is a yearly tradition in which fundamentalists argue that Christmas hasn’t been commercialized enough, and therefore Christians are the real oppressed minority.

To fight the heathen liberal retailers that show some restraint and don’t plaster the word “Christmas” all over their advertising copy, some organizations put out lists of places to shop and places to avoid.

But since the War on Christmas is an entirely fabricated gripe intended to make the already-privileged feel entitled to take up more space, they can’t agree on who the enemy is.

The problem? The lists don’t agree.

For example, AFA said that Rite Aid is “Nice”:

Company uses the term “Christmas” on a regular basis, we consider that company Christmas-friendly.

Christmas is not the main focus this holiday season at Rite Aid. The company uses phrases such as, “Holiday shop,” the “destination for all your holiday needs” and “shop Rite-Aid for the best holiday offers” without any mention of the real Reason for the season.

Liberty Counsel, though, liked Best Buy, Staples, Kohl’s, Sears, Walgreens, and CVS, but AFA listed them all as either “Naughty” or “Marginal.”

If the point of the lists is to change the stores’ behavior, it would help if the organizations coordinated instead of running around like the Three Stooges.

Two stores both organizations vehemently agree on are Target and Hobby Lobby.

Both listed Hobby Lobby – famous for winning a Supreme Court case in which they argued that a corporation has a religious right to block the women who work for it from receiving adequate health care – as “Nice.”

AFA’s description is almost indecent, saying that Hobby Lobby is a “5-Star rated company” even though AFA’s list doesn’t use a star system.

Target, on the other hand, gets nothing but hate.

Looking at their website, the word “Christmas” appears a few times. But the right is still mad at them for letting transgender people use the bathroom, so mad that Target doesn’t even appear on the “Naughty” lists.

Instead, AFA has an action alert on their front page about Target. They don’t just want you to avoid the store for Christmas, they want you get your friends to pledge to boycott it, complete with a picture of a little white, blond child – with long hair and wearing pink so you know she’s a girl – looking worried.

Another rightwing organization put out a video to promote the boycott, and they appear to believe that they are responsible for any shift in Target’s quarterly numbers.

The Religious Right believes that there’s a War on Christmas, they just don’t agree on who they’re fighting against.

But that’s understandable, considering how petty their complaints are. Whereas Muslims have to deal regularly with fires being started in mosques, AFA and Liberty Counsel will have you believe that the real crime is that Radio Shack isn’t displaying a nativity scene.

Donald Trump is claiming victory in the War on Christmas, saying he brought "Merry Christmas" back to the White House. We found plenty of evidence proving him wrong… #inners pic.twitter.com/fGBSbYybvx