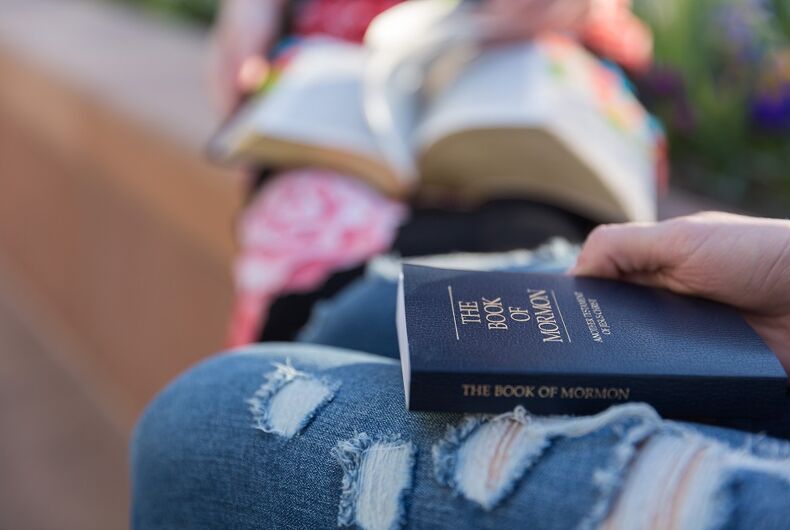 Mormonleaks, an organization that leaks documents from the Church of Jesus Christ of Latter Day Saints, released a guidebook this week about homosexuality.

The 1981 book, published by the First Presidency and the Council of the Twelve Apostles, says that it was intended for “stake presidents, bishops, mission presidents, branch presidents, quorum leaders” to “understand and treat the problem of homosexuality.”

According to a survey cited in a psychology textbook, 95% of men and 89% of women said that they had masturbated.

While it is not known if the book is still being used by anyone in the church, Ryan McKnight, the founder of Mormonleaks, told Newsweek that it was never officially renounced. “The church has never come out and said, ‘Throw away this manual, it is no longer relevant.’”

The booklet, generally, is a guide to making gay people feel bad about themselves through homophobia and the false hope that they can become straight if they try hard enough.

A Church leader should, according to the booklet, start by pretending to be nice “because the individual is usually very sensitive to any indication that you do not accept him.” The leader should also make sure that they know they can turn straight if they try hard enough (“if the battle is well organized and pursued vigorously and continuously”).

Once the gay person – who presumably comes from a homophobic community and desperately wants to be accepted by others and by their god – is duped into thinking that the Church leader can and will help them turn straight, they should avoid gay people, force themselves to interact with the opposite sex, pray, exercise, ape “appropriate masculine or feminine roles,” and find a hobby like gardening.

That’s only if a gay person wants to become straight. If they have a “rebellious attitude,” then you should “rebuke them with a sharpness” until they “understand the seriousness of their sin.”

The book says that it’s based on unspecified “work” with gay men, but it also claims that it applies to lesbians as well.

The Trump Administration banned the word ‘transgender’ at the CDC

A men’s barbershop refused to serve a trans man