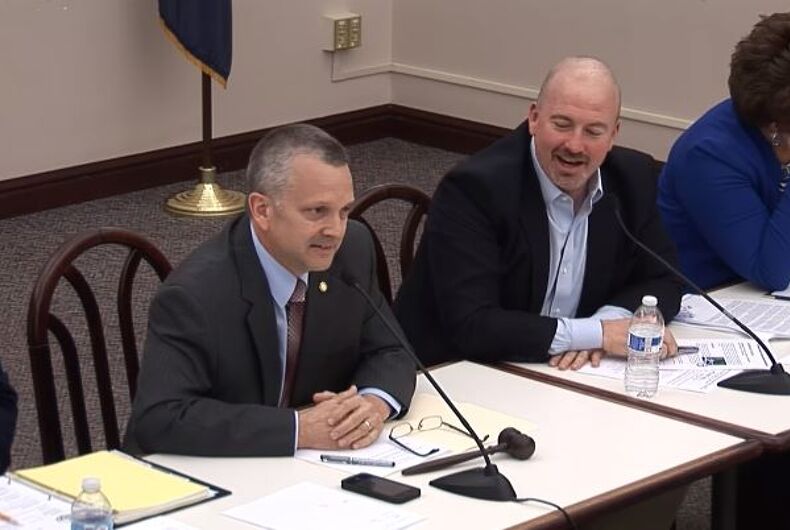 A Pennsylvania lawmaker Democrats are calling on to resign after what they are calling “a random homophobic tirade,” suggested during a radio show appearance that he wishes he could have gotten violent against his colleague for briefly touching his sleeve.

Rep. Daryl Metcalfe interrupted a committee this week to admonish his fellow lawmaker, Rep. Matt Bradford, for briefly placing his hand on Metcalfe’s sleeve in order to get his attention.

He suggested Metcalfe, who is married to a woman and has four children, might be gay, and told him, “keep your hands to yourself.”

Metcalfe appeared on the Chris Stigall Show, a Philadelphia talk radio program, to talk about the incident, and somehow managed to make the whole thing stranger and darker.

“What a dumb story, huh?” host Chris Stigall said, after recapping the events.

“I never expected that there would be so much attention to my calling on Rep. Bradford to do what I’ve asked him in the past, and that’s to stop touching me constantly during meetings. I mean, act like a professional,” Metcalfe said.

“Have you considered using the hashtag ‘Me Too,’ maybe that would help, maybe that would work,” Stigall said, referencing the social media trend of coming out about being a victim of sexual assault or misconduct.

“Because I thought we were living in an era where if you were being touched in an unwanted way you were able to speak up without being shamed or criticized.”

“Well, that’s what’s unbelievable,” he said. “Gov. Wolf tweeted out yesterday that Republican leadership should remove me from my chairmanship, which really, it’s not something that’s ever done. It’s not really something they even have the power to do, based on the way the rules are for what the governor is calling on them to do it for.”

Rep. Metcalfe’s comments yesterday were offensive & discriminatory. Unfortunately, this is part of a disturbing pattern of behavior. I urge House leadership to re-examine whether it is appropriate for him to continue controlling a committee that oversees civil rights legislation. https://t.co/x0gnXoTGag

Sims, whom Metcalfe said was at the meeting and yelled out, “I do!” when he said Bradford might have fellow Democrats who like being touched by men, is also among those criticizing the Republican. Sims is the first openly gay elected official in the state.

Metcalfe once prevented Sims from speaking in support of marriage equality on the House floor, claiming he had to because God. He also sponsored a bill to define marriage as between one man and one woman in the state’s Constitution.

“It’s interesting how now they’re turning the person who’s the perpetrator, the person who has touched me repeatedly for months — and I’ve told him in the past publicly, in the microphones, stop touching me now,” the lawmaker responded.

“And I’ve told him privately, on a more private setting up on the House floor where it’s just a couple people, that he shouldn’t be doing so,” he added.

Bradford has explained that he speaks with his hands, and that the video speaks for itself. There is no indication that any of the touching has been of a sexual nature.

Metcalfe at one point in the interview suggests Bradford should take a page from Sen. Al Franken, who is resigning amid allegations of forcibly kissing and groping women against their will.

Naturally, there was no mention of Republican candidate Roy Moore, accused of sexual assault by a number of women who claim the incidents happened while they were teens.

Metcalfe suggested that instead of calls for him to resign, they should be calling on Bradford to step away.

Not so random after all

Metcalfe revealed that his response during Tuesday’s meeting was pre-planned, and intended to get maximum attention.

“You know, I planned this. I planned what I was going to say for weeks, if not months, myself in response to it, to try to draw attention to his behavior. Because he’s not getting the message. Although, I think now he might have gotten the message,” he said, eliciting laughter from the host, who said, “Well, you got it!”

But he bemoaned the attention it has gotten from Democrats calling on him to resign.

“They’re trying to turn the perpetrator into the victim,” he said of Bradford. “It’s just outrageous.”

“He’ll reach over, touch my arm, tries to pretend like he’s the voice of reason, he’s going to calm the situation down. Because he’s always losing, every vote that we have, he loses pretty much. Because he’s a Democrat, I’m a Republican, we’re the majority,” he said.

Bradford was trying to get a reaction?

As if this story didn’t have enough, there is now the addition of a conspiracy theory.

“He’s got some radical liberal ideas and we defeat him at every turn, and he doesn’t like it, so he tries to use this. I was told by one of my Republican colleagues that some Democrats were telling him that he’s been doing this to try to provoke me, so that they could get some type of reaction and try and use it for their own fundraising,” Metcalfe claimed.

Metcalfe suggests he wishes he could get violent

Metcalfe suggested during the interview that while he has to act professionally as an elected official, he wishes he could be more forceful.

“I come from a blue collar region,” he said, listing his bona fides as the product of teamsters.

“What would be the reaction if you just hauled off and decked him, instead of saying what you said?” Stigall asked.

“Well then charges would be filed against me,” Metcalfe said. “Whereas right now the situation is, he’s touched me in an unwanted way, in an inappropriate way because I told him to stop.”

Listen to the full interview at the CBS Philadelphia news website…You’re going to want to hear it for yourself, trust us.