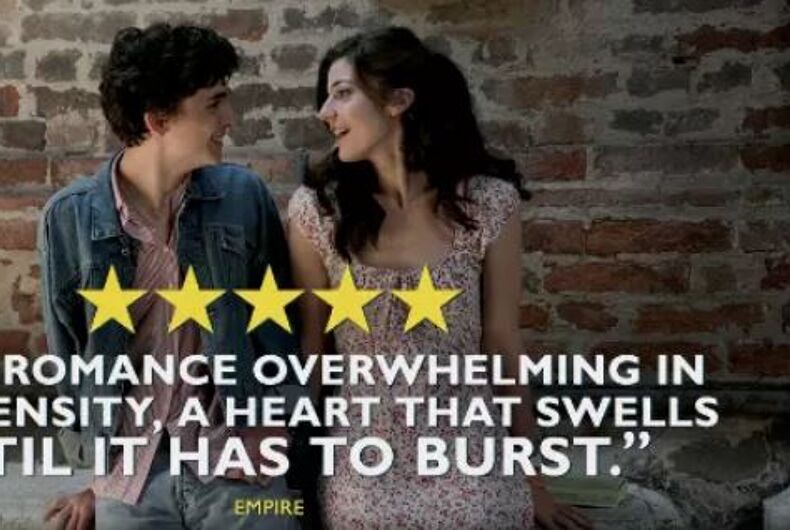 The new film Call Me By Your Name is a coming-of-age story, set in Italy, and centered around a budding romance between 17 year-old Elio, played by Timothée Chalamet, and his father’s 24 year-old American student Oliver, played by Armie Hammer.

You would be forgiven if you didn’t pick up on that story line from a tweet Sony Pictures sent out that saw them getting immediately skewered for straight washing the very gay movie.

The Sony Pictures UK Twitter account asked if you had seen the movie yet, and then showed Elio with his friend, Marzia (Esther Garrel). While he does have a brief fling with her, she is definitely not his love interest, as the image would have you believe.

This is not the couple the reviewer is quoted as referencing, calling it “overwhelming in its intensity.”

@SonyPicturesUK disgusted to see your attitude towards the film "Call me by your name" I might stop watching other Sony pictures in protest.

Pretty offensive and disingenuous, @SonyPicturesUK, to try and sell this gay romantic film as heterosexual. What are you afraid of? Be proud

Why are you making it look like a heterosexual romantic film? Erasure in advertising to appeal to the mass market, hm?🤔

One Twitter user noticed a similarity in how Brokeback Mountain was promoted.

I remember this game. pic.twitter.com/RP2AQGI7hb

Watch the trailer for the movie below.

What happened when the Liberal Redneck paid a visit to a gay nudist camp?