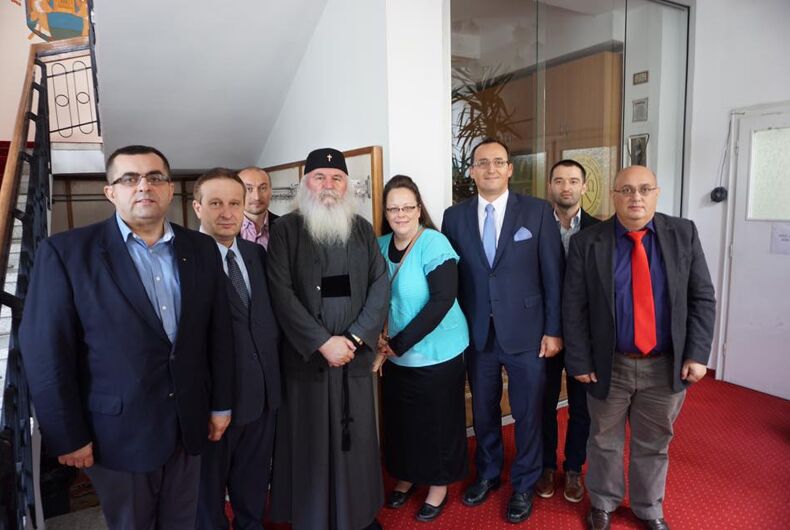 Disgraced Kentucky county clerk Kim Davis, infamous for going to jail over her refusal to issue marriage licenses to same-sex couples, is taking her anti-gay sideshow on the road. The lawless government official is in Romania exhorting citizens to take away the civil rights of gay people.

Davis is touring the country with Harry Mihet, Vice President of Legal Affairs and Chief Litigation Counsel for her attorneys at the religious right legal organization Liberty Counsel. The group has been designated an anti-LGBT hate group by the Southern Poverty Law Center.

American fundamentalist Christians have joined forces with the Orthodox Church to try to change Romania’s constitution to ban same-sex marriage. The country’s laws currently defines marriage as between “two spouses” and the advocates want it changed to “man and woman.”

Under Romanian law, the constitution can be changed if at least 500,000 residents petition the government for a change. The Coalition for the Family, a religious right group backed by the church, collected over 3 million signatures on the petition.

The petition was certified by the country’s highest court and is awaiting approval by the Senate. Parliament must approve any revisions before it goes to a national referendum. Proponents hope to hold the vote this autumn, but Romania’s president, Klaus Iohannis, has opposed the change. The largest opposition party also opposes it.

Davis and Mahit are having meetings with high ranking officials with the Orthodox Church, are giving speeches across the country, meeting with members of Parliament, and blitzing the media with anti-gay rhetoric and untruths. The two are using Davis’ jail sentence to “warn” Romanians that allowing same-sex marriage will bring back communist-era bans on religion.

“I am so glad for this amazing opportunity to finally introduce Rowan County Clerk Kim Davis personally to my Romanian people,” said Mihet, who was born in the country. “Her story resonates loudly with them, and they are receiving her tearfully and very warmly, because they can still remember the not-so-long-ago days when they were themselves persecuted and imprisoned for their conscience. The freedom of conscience transcends national, cultural, religious and denominational lines, and Romanians are determined to prevent such injustice from ever happening again in their country.”

In 2015, the hate group breathlessly announced that Davis had met with Pope Francis during his visit to the United States to discuss religious freedom, a claim the Vatican quickly debunked. The Pope did not know who Davis was when an Archbishop snuck her into a private reception. The Archbishop was later replaced and the Vatican issued a strong response to say clarify the meeting was not a show of support for the lawless government official.