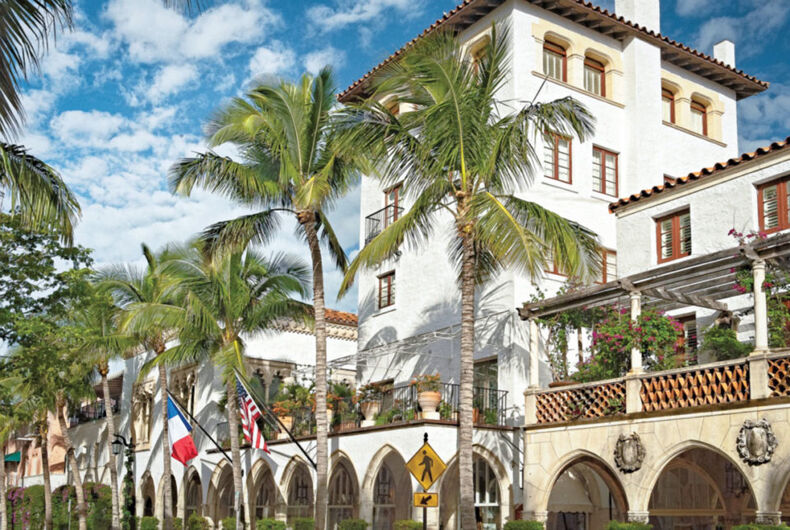 Addison Mizner came to Palm Beach in 1918 to die.

Instead, he would change South Florida forever, especially Boca Raton, with his enduring signature Spanish revival architecture. Eighty-four years after his death, that imprint is hard to miss.

While many in Palm Beach County know who Mizner was, few probably suspect he may have been gay.

No one has written about Mizner’s suspected homosexuality and most of the evidence today amounts to innuendos. Some authors do give us clues, such as Caroline Seebohm, who described Mizner in her book Boca Rococo: How Addison Mizner Invented Florida’s Gold Coast as having “eccentricities” and a very flamboyant personality.

Additionally, at one point in his life Mizner declared himself to be a lifelong bachelor.

Mizner ended up in Palm Beach County after World War I put a damper on the business he had drummed up as an apprentice draftsman in California. He was broke and sick with necrosis of the bone in his leg from a childhood injury.

When he came to Palm Beach, Mizner found that society revolved largely around one man, Paris Singer. Singer was a wealthy socialite whose father had created a wildly successful sewing machine company.

Mizner, on the other hand, was not even an architect. He never went to school for it, and the states of New York and California, where he came from, never officially recognized him as such.

Yet somehow, Mizner and Singer struck up an unlikely friendship. They met at Gus Baths (later known as the Lido Baths), a popular hangout in Palm Beach, at the time off of Worth Avenue around where the clock tower stands today. But don’t mistake those baths as necessarily a gay club; many straight men once frequented bathhouses as well.

Autobiographies and memoirs written by both men describe the hunky nature of the men in the Gus Baths scene, and both men seemed to be drawn to a frequent visitor at the time, Norman Selby, better known to the world as champion boxer Kid McCoy (from where the phrase “Real McCoy” comes from).

Both men subtly described McCoy as the physically handsome instructor. McCoy was straight, and nothing suggests otherwise. Even so, he would have been a gay man’s dream at the time.

Mizner would come to be known for being the father of development in Boca Raton. He created some of the most notable architectural works throughout Palm Beach County, including Villa Mizner on Worth Avenue, The Everglades Club in Palm Beach, the Woman’s Club in Boynton Beach and many private homes.

Today, he is regarded as an architectural mastermind. But few have discussed his sexuality.

Singer might also have been a closeted gay man. Around the time Mizner arrived, Singer had been involved with a female dancer, Isadora Duncan. In her autobiography, she described him as unapproachable, but a good companion nonetheless.

The relationship was probably just one of companionship. Feeling what one might assume was likely sexual frustration, she’d often cheat on him when he was not around. Upon returning from a trip abroad, Singer realized McCoy had been having a relationship with Duncan and he distanced himself from her.

It was in the aftermath of this relationship that Mizner and Singer grew close. And in turn, Singer launched Mizner’s career as the local society’s go-to architect.

As for Mizner, after having a few unsuccessful relationships with women in California and New York, he declared himself a lifelong bachelor, giving us another clue of his sexuality.

Before coming to South Florida, Mizner befriended an openly gay man in New York, architect Stanford White. White would become a professional mentor to Mizner. In Aline Saarinen’s unpublished biography of White, she revealed him to be an open homosexual, something almost unheard of in those days.

Seebohm’s book, Boca Rococo, not only called Mizner eccentric and flamboyant but referred to Singer as being both as well.

While most histories of Mizner simply ignore his sexuality, pop culture has taken notice. In 1999, Stephen Sondheim and John Weidman wrote a musical titled “Road Show,” which told the story of Addison Mizner and his brother Wilson Mizner, from their adventures during the Alaskan Gold Rush to the development of Palm Beach and Boca Raton.

While the play was completely fictionalized, it portrayed Addison Mizner as openly gay. While traveling to Palm Beach for the first time, he meets a young man named Hollis Bessemer who comes from a wealthy family, but is estranged from them. Mizner is smitten by the young man who claims to have a strong interest in the arts and in setting up an art colony in Palm Beach. Bessemer and Mizner end up becoming lovers and together come up with the idea of developing Boca Raton.

The musical most recently had a run last year at the Kennedy Center in Washington, D.C., directed by Gary Griffin. When Griffin first contacted Sondheim about possibly bringing it back, he said Sondheim told him, “Nothing would make me happier than to see that production live, and ‘Road Show’ could be done big, if someone wants to spend the money.”

Mizner will always have a legacy in South Florida for jump-starting the trend of Spanish-revival architecture so many others imitated throughout the region. He also left the area with some of the most beautiful structures in the U.S.

But his legacy as an early influential gay man in South Florida has gone largely unnoticed.

Graham Brunk, born and raised in South Florida, is a librarian in Palm Beach County and has an interest in local LGTBQ historic events.

*All photos except Kid McCoy are courtesy of the State Archives of Florida.

Milo Yiannopoulous: Ellen DeGeneres is involved in a coverup of the Vegas shootings