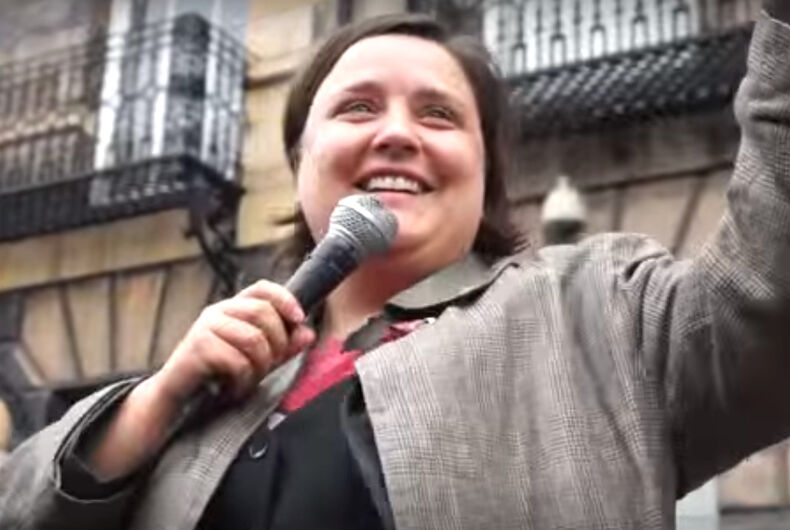 Scottish comedian Susan Calman will be appearing on Strictly Come Dancing, a BBC reality show that was Dancing with the Stars‘ predecessor, pairing celebrities with professional dancers.

Calman is openly gay and married to a woman, but she will be dancing with a male partner. This has drawn criticism on social media since the show refuses to include same-sex dancing partners at all.

“Strictly has chosen the traditional format of mixed-sex couples and at the moment we have no plans to introduce same-sex couples in the competition,” a spokesperson for the show told the BBC.

But Calman says it was her choice to dance with a man on the show. “No one is holding me hostage in this room, making me wear a dress and dance with a man. I want to learn how to dance,” she said.

She also said that dancing with a man is a political statement. “I think politically, there’s nothing more powerful than having an openly gay woman on the biggest show on television, whose wife’s on the front row, doing what she wants to do.”

And Calman says that it’s unfair that LGBTQ people are criticizing her. “For the gay community to criticize me and try to get me what they want to do is, I think, as difficult as suggesting the straight community are trying to.”

I can’t fault Calman for wanting to be on the show.

The show, though, doesn’t have to follow whatever it thinks is the “traditional format” for dancing. That’s a choice, and a pretty homophobic choice at that, considering the long history of homophobes using “tradition” as an excuse to discriminate.

Darlene will have a gender-creative kid in the ‘Roseanne’ revival