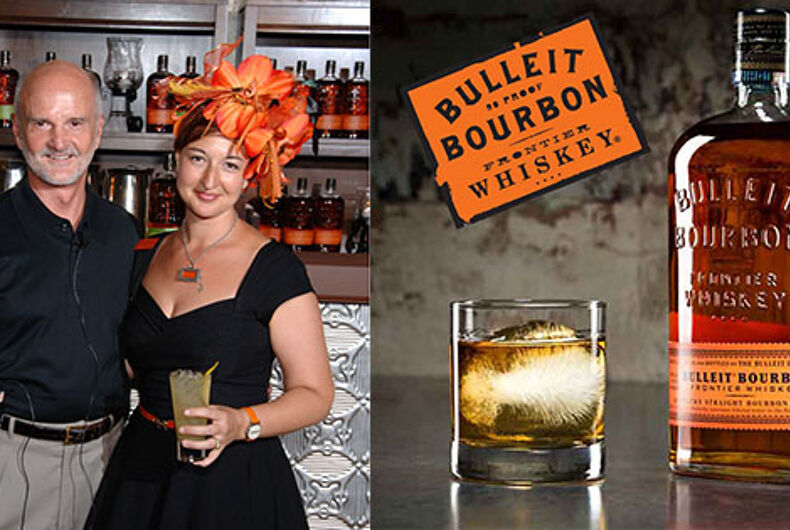 Editor’s note: This report has been updated to include a statement by a spokesperson for Diageo refuting Hollis Bulleit’s claims, and her response defending them.

Editor’s note, II: A statement from HRC’s national press secretary Sarah McBride has been added to this report.

There are unanswered questions following accusations posted to Facebook by the so-called First Lady of Bourbon that the company founded by her father, Tom Bulleit, has cut her out of the family business because of whom she loves.

As Queerty reported, heiress Hollis Bulleit revealed that the family has excluded her from gatherings ever since she came out as a lesbian nearly a decade ago. In January of this year, Bulleit claims she was squeezed out of the company altogether.

But was Bulleit Bourbon’s parent company, Diageo, kept in the dark about the alleged homophobia Bulleit claims she was required to conceal?

I should never have been put in a position to hide my family’s homophobia or my company’s complacency in order to keep my job. I did nothing wrong. I have nothing to be ashamed of. But the punishments, the silent treatments, and the threats continue.

What’s troubling is that Bulleit’s claim that she hid antigay attitudes at her family’s business is in stark contrast to the reputation of Bulleit Bourbon’s parent company. Diageo is the recipient of a perfect score on Human Rights Campaign’s Corporate Equality Index. The liquor company boasts about its diverse workforce of 33-thousand employees and proudly notes it’s been awarded top honors by HRC nine years in a row.

“The CEI has driven significant and measurable change across corporate America,” said Sarah McBride, national press secretary for HRC, in an email to LGBTQ Nation on Friday. “When it started nearly two decades ago, 3 percent of Fortune 500 companies had gender identity protections and today, over 80 percent do. Without the CEI, thousands of workplaces would not have policies today — like trans-inclusive healthcare — that have improved millions of lives.”

A spokesperson for Diageo responded late Wednesday, after this report was published, denying Ms. Bulleit’s claims.

In advance of Hollis’ contract expiring in 2016, we offered her a multi-year extension. Despite it being an increase versus her previous arrangement, we were unfortunately not able to come to terms with her on this new contract. Any implication that she was fired, or that failure to come to terms on this agreement was due to her LGBT identity, is simply false. We are very proud of our long track record of work, through many of our brands, to support the LGBT community. We are also appreciative of Hollis’s past efforts on behalf of the brand and the industry.

In a comment on her Facebook page, Bulleit told LGBTQ Nation that’s not how it happened, at all.

I asked for a multi-year contract because I was encouraged to relocate for which I paid for all relocation fees. I was encouraged to relocate because I was led to believe by Diageo that my job would be more secure in Kentucky. I was promised the use and rental of my house for events, mural work, & painted bottle sales; all of which were removed from my contract within months of relocating. I asked for a longer contract because the norm for a decade was stints of two year contracts with up to six months between negotiations (and therefore no pay) and that is no way to build a future. I was offered a contract for 100% more work and less pay. In 2015, I brought to the attention of the company that my partner of almost a decade still had never been officially invited to an event by Diageo. Shortly after Diageo stopped using me in the workforce in the same capacity. Passive aggressive and complacent homophobia is hard to prove and easy to pawn off onto honoring the family or “familial homophobia”. I think that Diageo has made decent strides in the LGBTQIA community with it’s other projects, but for me I did not feel the love. At one point a reporter from Forbes quoted Diageo as saying “I was allowed to be out at work” which is as absurd as saying that “I’m allowed to be married at work”. The fact that someone felt that they needed to be permissive about allowing my sexual orientation is over-congratulatory and condescending to a large degree.

Bulleit told her friends and followers that her Kentucky-based family was not only shunning her and her partner Cher, but now was also “erasing” her from the company she stood to inherit someday: “I refuse to accept or be marginalized now or in the future.”

Bulleit posted on Saturday that a photo of her at a groundbreaking was “symbolic of digging my own grave.”

Then on Sunday, Bulleit shared a photograph of her embracing her partner on a dance floor, along with her most personal feelings, revealing that she “gave my life to my family and my brand but I also was expected to give up my dignity.”

In 2008, I was asked to come home for Christmas; yet Cher was not invited. The only holiday that we attended was Thanksgiving in 2016, and then we were promptly uninvited via text from the following core family Christmas. And because family was business and intertwined with a global corporation, I find it odd that I did not benefit from the departments and safeguards that are put into place to either intervene or provide mediation or educational diversity training as would be the expected protocol for employees in this type of situation. In light of my experience, I do not understand how the company I worked for is on many of the top 10/ 50/ 100 “best places” for LGBTQIA employees to work.

“I do not think people understand the extent that I have been possibly black balled and ostracized,” Bulleit wrote in another post Sunday, “and that I have to completely start anew.”