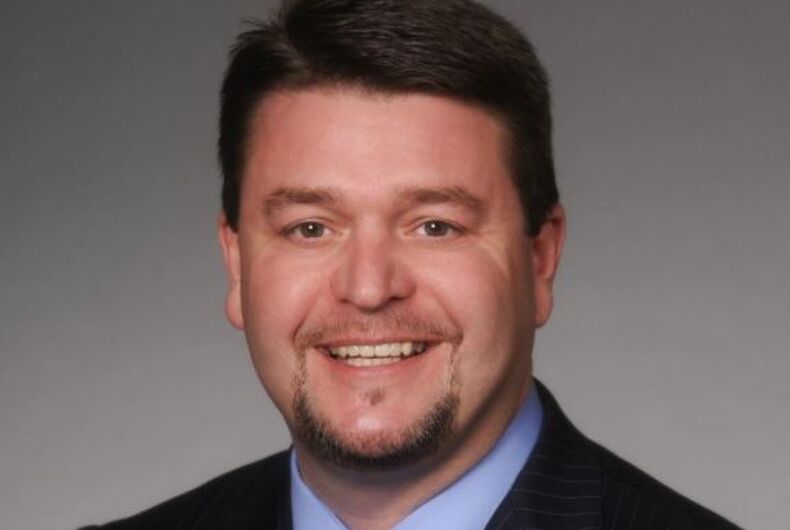 A Republican senator from Arkansas has compared LGBTQ activists to Nazis, and is now fundraising based on the upset responses he has received from reasonable people everywhere.

Sen. Jason Rapert made the comments on Facebook while sharing a Daily Caller article written by James Gottry, an attorney for Alliance Defending Freedom, the legal group representing Barronelle Stutzman in her “religious freedom” case, that the Supreme Court recently agreed to hear.

Stutzman refused to make floral arrangements for a longtime client’s same-sex marriage, claiming it would upset her religious sensibilities.

“The LGBT activists who behave as Nazis are trying to ruin anyone who ‘disagrees’ with them – even grandmothers,” he wrote. “Simply believing in the Bible is offensive to these activists. They can’t stand it if you disagree. They demand full compliance with their diminished morality. They clearly behave just like the ‘brown shirts’ and ‘SS’ troops that Nazis used to destroy Jews and anyone who disagreed with the Nazi ideology.”

Not only is this an offensive and ridiculous claim considering how many LGBTQ people the Nazis murdered, it misses the point that you’re allowed to believe whatever you want, but once your public business starts discriminating, we’ve got a problem.

“I don’t care what THEY believe, but I refuse to let them intimidate those who disagree with them,” he continues. “Our laws should not give special protections to people who behave this way. It is a sad time in American history.”

Seeing a good opportunity for a cash grab, Stutzman then played the victim, claiming he needed money because of all the mean liberals picking on him just because he made a little old outrageous false equivalency comparison.

Then, on Wednesday, he again took to Facebook to brag about all the cash he racked in: Over $8,000 he claims. Looks like his little ploy to stir up anger and hatred worked.