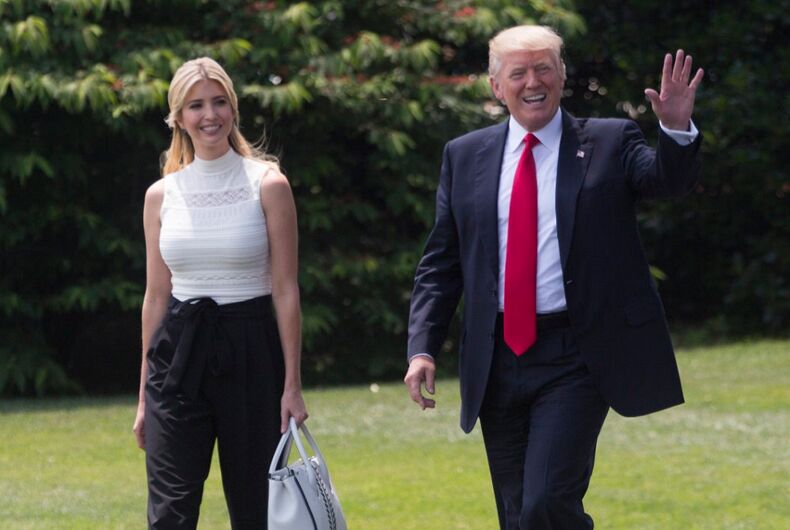 Donald Trump has appointed a person whose most recent work was activism against transgender rights to be the senior adviser for women’s empowerment in the US Agency for International Development (USAID).

USAID is an independent agency that administers foreign aid programs, including poverty and disaster relief programs.

Bethany Kozma worked for the Department of Homeland Security under George W. Bush. In 2016, she started the “United We Stand” campaign to end Barack Obama’s protections for transgender students.

In a post to a publication run by the anti-LGBTQ Heritage Foundation, Kozma wrote, “To put it simply, a boy claiming gender confusion must now be allowed in the same shower, bathroom, or locker room with my daughter under the president’s transgender policies. When I learned that predators could abuse these new policies to hurt children in school lockers, shelters, pool showers, or other vulnerable public places like remote bathrooms in national parks, I realized I had to do something.”

A video accompanying the article shares stories from women who were sexually assaulted in locker rooms and bathrooms by cisgender men who did not need anti-discrimination measures to enter those rooms. Those stories are presented as reasons to discriminate against transgender people.

She went on to accuse “LGBT activists” of bullying everyone – including her children’s vice principal – “into silence,” because one of the rightwing trolls’ favorite games is “I know you are but what am I,” where they use tortured logic to accuse the oppressed minorities of doing the exact things that oppressors do.

USAID has backed programs intended to increase LGBTQ people’s access to housing, health care, and political participation. USAID also has guidelines preventing contractors it works with from discriminating on the basis of sexual orientation and gender identity. The agency told BuzzFeed News that the agency is still committed to those programs and policies.

It is unclear what exactly Kozma will do in her new position, but it’s safe to say that she will not be advocating for all women’s empowerment.

Weekly Debrief: The Supreme Court sides with LGBTs and more