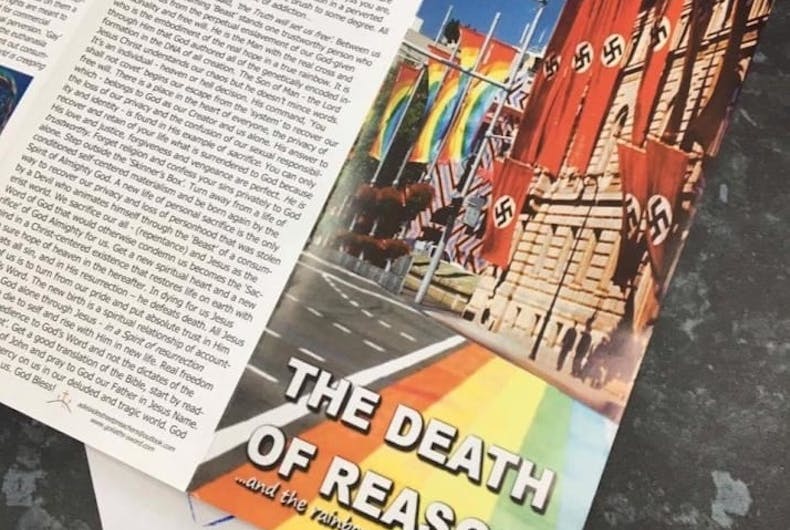 The flyer in questionPhoto: via Buzzfeed

A newspaper distributed flyers that compare LGBTQ people to Nazis this week, but says that it stopped distribution once it found out what the flyers said.

Kevin Bickle, a street preacher in Adelaide, asked the Sydney Post to distribute 60,000 copies of his flyer, “The Death Of Reason…and the rainbow walk to insanity!” The long, rambling text compares LGBTQ people to Nazi Germany and rails against consumerism and invasions of privacy.

“So Hitler’s invasion of the personal privacy of children in the 1930’s is the same totalitarian invasive influence of today,” the flyer said. “He used the same means, only now the pornography of power that is state propaganda has morphed from Nazi political perversion into perverted gay activism for abnormal ‘marriage’ equality.”

The flyers were distributed to homes in Melbourne suburb St. Kilda, a neighborhood with a strong LGBT presence.

“As soon as we became aware of the contents of this flyer, we immediately withdrew it from distribution from our delivery network because it is against our terms and conditions,” a spokesperson for the Sydney Post said.

As for Bickle himself, he doesn’t understand what the fuss was about. “We weren’t trying to be controversial, but we knew it wouldn’t be popular,” he told Buzzfeed News.

So apparently he thought he would start a war against the contemporary equivalent of Adolf Hitler that would somehow not be controversial. To say that he has no understanding of Nazi Germany beyond “Hitler was bad” is an understatement.

But he does understand how to sell homophobia, saying that he loves today’s Nazis, he just hates their Nazism: “We’re talking against homosexuality, but not against the homosexuals.”

Dvir Abramovich, Chair of the Anti-Defamation Commission, a Jewish civil rights group, said, “It shocks the conscience that such virulently anti-gay rhetoric has invaded the homes of residents in Melbourne, promoting its message of hate and exploiting the Holocaust to demonise the LGBTQI community and those supporting marriage equality.”