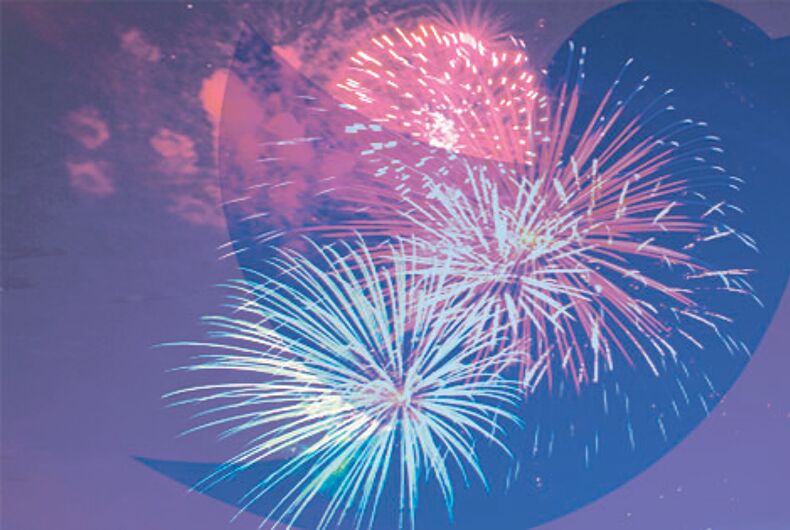 Here they are: the gayest Independence Day tweets we could find, as well as many patriotic and otherwise inspiring or just funny holiday-themed messages from queer celebrities and our allies. Along with one guy who keeps saying he’s our ally but has yet to prove it.

Because he’s in here, we also threw in a few other politicians, since they’re either the reason we’re in this mess — or they are the powerful people who will help us to fix it.

Somebody LGBTQ retweeted this guy. Who? I dunno, but I liked it, so here it is.

I know it looks messy, but we got this. pic.twitter.com/xkBXS3kMcx

Barack Obama didn’t tweet (yet) but David used to work for him, so here ya go.

We adore you, Janet!

RuPaul, the next generation?

The American dream is a Ponzi scheme. pic.twitter.com/qm46Y1IUqg

Now this is what we call Freedom! You go, Chelsea!

The funniest Chris Christie on the beach tweet we’ve found. And there are a lot of them.

Can’t wait to see our longtime ally and her Will & Grace team back on TV this fall!

On the water, a glorious sunset, cleansing salty air, and fireworks. Heaven. Photo by @therealmariskahargitay

Another celebrity in the LGBTQ universe retweeted this one and I can’t remember, boo. But it’s got Hamilton in it, so, yay!

"I’m just like my country—I’m young, scrappy, and hungry, and I am not throwing away my shot." #IndependenceDay pic.twitter.com/oFwWMMVdnx

Hawt. He’s on YouTube (but you already knew that).

We figured there’s got to be one straight guy reading this. This is for you. And for all our lesbian and bisexual readers, too, of course. That’s not to mean that she’s, oh, never mind.

These scantily clad patriots will make your #4thOfJuly that much brighter! https://t.co/e7QWnRj4mv pic.twitter.com/7ShwtLYBXh

Well, she is right. #LoveWins

Suze Orman to gay couples: There are more than 1,100 financially smart reasons to marry https://t.co/yBpsioN9A6 via @usatoday

Laverne, we worship you, and this message. P.S. Doubt is back on CBS, so watch!

Scarcity is a myth. There is room for all of us. I celebrate those trans folks who have come before me and who are out there right now unsung, killing the game. Those names I know and don't know I sing your praises for it is revolutionary for a trans person to be seen and known in a world that says we don't exist, shouldn't exist. I love you! Follow your dreams! #TransIsBeautiful

Being Black on July 4th.

What's a national celebration of freedom to people who don't feel free? pic.twitter.com/tpcuLn9Vwd

We are all of us earthlings.

Happy #IndependenceDay! From Earth to Mars…and the space in between…the American flag has traveled with us on many of our missions. Celebrate your Fourth of July holiday with some of these flag photos taken throughout our many years of space exploration. Credit: NASA #FourthOfJuly #4thOfJuly #America #AmericanFlag #Independence #Space #nasa #missions #flag #stars #StarsAndStripes #mars #exploration #unitedstates #july

Preach, Monica! If you’re not reading her blog, TransGriot, you’re missing out.

This sums up my feelings about this country todayhttps://t.co/uU1VXlKBEQ

Time for the politicians to weigh in. We ❤️ Ted.

Dear @acctfortwit: I served on active duty in the US military to protect your freedom to say stupid things. Happy July 4th! https://t.co/nDu5Wu2TWY

Hillary hasn’t tweeted (yet) but her hubby did. He also won the popular vote. Twice.

What we celebrate today is not just the birth of a nation but the ideals that built and sustain a democracy. Happy 4th of July!

And then there’s this. Please try to enjoy all the white (and, yeah, at least 2 Asian) faces in this choir and orchestra, performing “Make America Great Again.” No, really, it’s a song now. Imagine setting Mein Kampf to music.

Thankfully, there is an antidote. Live long and prosper, George Takei.

Dear Donald: We didn't gain our independence from one empire simply to fall under the sway of another. #VladInfluence

Finally, what better way to end than with someone dead who (thanks to her family) is still tweeting. Happy Independence Day!

Joan was a true patriot. Happy 4th of July! pic.twitter.com/GEavx8Jlo8