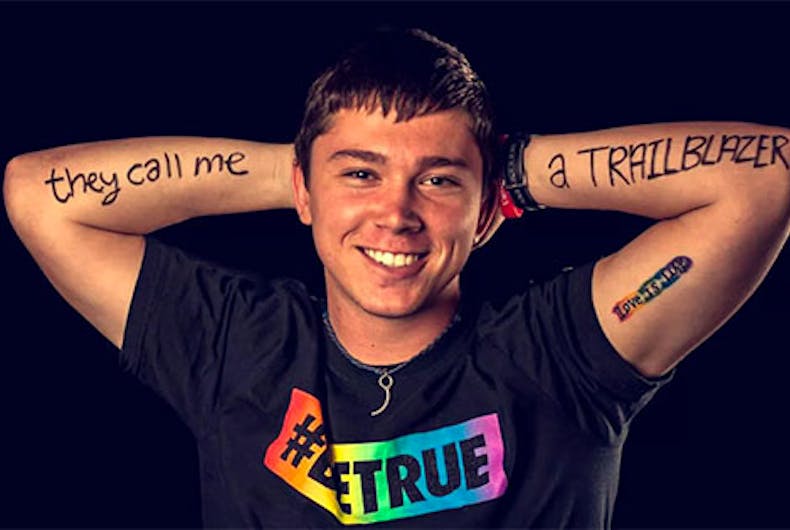 Austin Hodges, 19, is a rising sophomore at the University of Houston, an outstanding graduate of Anahuac High School, and a proud gay man whose struggle for acceptance was a cakewalk in the classroom and in sports, but a nightmare at home.

Players, parents, coaches and fans cheered on the only gay player on the high school team, even when he didn’t follow tradition and go to the locker room at half time.

“I headed to the other side of the field where, still wearing my football uniform, I applied some makeup and got ready to do high kicks and splits with the drill team,” Hodges wrote in an op-ed for Outsports.

I was the only guy in my school district to be on the drill team, which also made me the only gay guy on the team.

I could feel the crowed turn their heads as we marched to the sounds of our captain’s whistle. The fans seemed a bit in awe and had no idea what to think seeing a guy out there doing drills. As we got in our formation and waited for the music to start, I was very nervous, but once the music started we got to dancing and my nerves went away. It was an amazing moment.

But what wasn’t so great was how his Southern Baptist parents reacted upon learning from a love letter that he had his first boyfriend, back in 9th grade.

As soon as I walked into the house my dad started yelling at me and saying many hurtful things that are just too hard to even type. My mom was screaming as well, saying it was “my choice” to be that way. As she saying this, she grabbed my hand and said just as it would also be my choice to not let her burn my hand on the hot stove as she was pressing it closer and closer.

My mom is a very stout woman and it took every bit of my strength to pull away from her so that she wouldn’t burn my hand. The next weekend, when my parents left the house, I stayed home knowing what I was about to do.

Hodges tried to kill himself with an overdose of pills. Luckily he didn’t take enough.

But upon waking up, he realized he wanted to come out to everyone at his high school in conservative southeastern Texas.

I remember the first teacher I told was my biology teacher, Mrs. Broomas. We had a sex-ed quiz and one of the questions asked, “How could you prevent getting a girl pregnant while having intercourse?” My reply was, “I’m GAY so I don’t have to worry about that.”

As she got to my paper she broke out laughing and just smiled at me. She then asked if she could read it to the class, and with confidence I told her she could. When she did, all the kids laughed and gave me a hug afterward and told me no matter what that they would always be my friends and still support me. Everyone in that class was either on my cross-country team or on my football team.

After that, the whole school found out and word traveled to all my teammates in athletics. Each of them made sure I still felt welcome with them and that we were all a family with the same goal, to win at whatever sport we were playing.

During my high school career, I played football, ran cross-country, did powerlifting, played golf and did track and field. Football was fun but cross-country had its special significance since running gave me time to think and de-stress from what people thought about me being gay.

My cross-country teammates and coach were incredibly supportive and they pretty much were the family I didn’t have at home and my coach was a substitute mom though she never knew I thought of her that way.

Read the rest of Hodges’s story and about the coach who stood up for him in middle school on Outsports.

Caught in the act: Ellen shames audience member for stealing