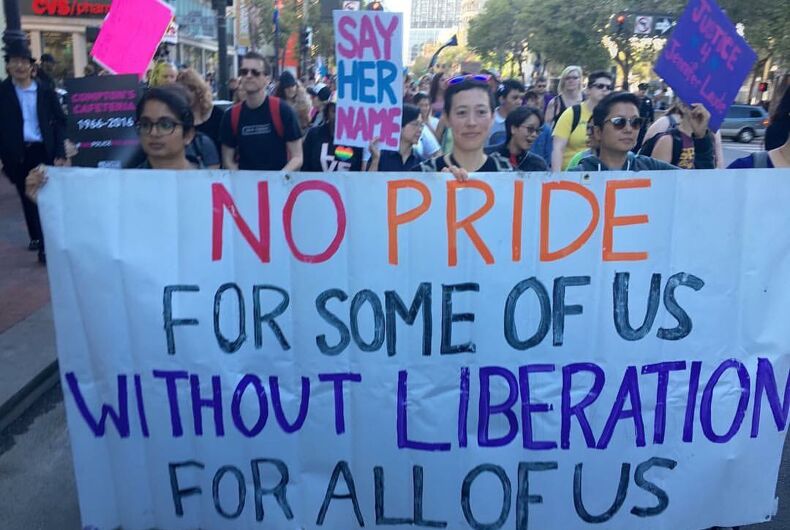 Protests marked Pride celebrations in major cities across the country last weekend, with LGBTQ people both marching in and blocking Pride parades to get across political messages including objections to police, corporations, institutional racism, and Israel.

In New York City, 12 people carrying signs that read “No Cops, No Banks” were arrested and charged with disorderly conduct outside the historic Stonewall Inn. According to CNN, the arrests were “authorized” by NYC Pride organizers after giving the protestors 10 minutes to speak out.

“There were some 40,000 marchers behind them who needed to have their message (heard) as well,” NYC Pride spokesperson James Fallarino said. “We believe strongly that it’s a free speech event. That has worked on both ends of the spectrum. We have always held the line that any group interested in our march can participate.”

Fallarino said that while organizers recognize the problem of police violence, they can’t run an event that size without police support. He also said things are different than they used to be, and the NYC Pride organization has a “good working relationship” with the NYPD.

“As you probably know, this march started after a police raid at Stonewall Inn,” Fallarino said. “We’ve come a long way since then.”

Still, even if cops are marching in Pride parades instead of raiding gay bars, there’s still a long way to go before everyone in the LGBTQ community — particularly queer people of color, immigrants, and transgender folks — feel safe marching alongside, or guarded by, uniformed officers.

That fact was apparent in Minneapolis, where Pride organizers faced protests against police presence after declining to ban uniformed officers from participating in the parade. Police had originally been scheduled to lead off the parade, but organizers instead had them in the middle of the crowd, with an unmarked cop car at the lead spot.

Minneapolis Police Chief Janee Harteau, who is a lesbian, called the decision “divisive,” but Pride organizers said they wanted to respect those who were still hurting after the recent acquittal of the officer who shot and killed Philando Castile.

Protestors affiliated with the Black Lives Matter movement delayed the parade for about an hour as they made themselves the de facto vanguard of the parade, stopped to protest at each intersection. While it interrupted the festivities, some attendees said they appreciated the message.

“I completely understand why they are here, why they need to have their voices heard,” Bethany Piety of Minneapolis told CBS. “There’s a lot of people who are confused right now but I definitely support their right to be here.”

Groups with messages opposing police at Pride made their presence known at parades in Chicago and Seattle as well.

In Chicago, trans and queer people of color blocked the parade to protest politicians, corporations, and police, calling for a return to the true meaning of Pride.

“The trans community of Chicago has risen up to explicitly denounce the Chicago Pride Parade and Festival, and to announce our intention to once again form our own spaces, to better serve and represent our own pride and liberation,” organizers wrote in a public statements. “The Compton’s Cafeteria Riots and the Stonewall Riots are how we mark the legacy of Pride: Strong, proud, and unapologetic trans resistance in the face of a world that continues to prefer our bodies as corpses in the ground, rather than revolutionaries in the streets.”

But the big controversy in Chicago happened during that city’s Dyke March.

Three march attendees were reportedly asked to leave due, at least in part, to the fact that they were carrying rainbow flags featuring the Jewish symbol the Star of David. Organizers said the individuals were asked to leave because they expressed Zionist views, but the rejected marchers said they were unfairly targeted for being Jewish.

One Dyke March collective member told Windy City Times that the flags “made people feel unsafe” and went against the march’s anti-Zionist objectives.

A Wider Bridge Midwest Manager Laurel Grauer, who was among those ejected from the parade, said she has brought that flag to the march for years without issue.

“It was a flag from my congregation which celebrates my queer, Jewish identity which I have done for over a decade marching in the Dyke March with the same flag,” she said.

A young Muslim woman called out what she saw as a double standard in making one faith’s religious symbols synonymous with oppression.

“This is my pride flag. It has the Islamic crescent and star on it, like the flags of Turkey, Pakistan, etc.,” Nadiya Al-Noor wrote on Facebook. “Should I and my flag be banned from Pride because of the countless horrific murders of LGBT people in Muslim countries, the state-sanctioned hatred and persecution of LGBT people?”

In San Francisco, protest was woven into the Pride parade, with a band of political resistance groups leading the parade.

“Encouraging all participants to send a strong message against the regression and exclusion demonstrated by the current administration in Washington D.C., this year’s SF Pride Parade/March will be led by a large collection of resistance groups displeased with the lack of LGBT acceptance and support, and the imminent threats to destroy recent human rights gains,” organizers wrote in advance.