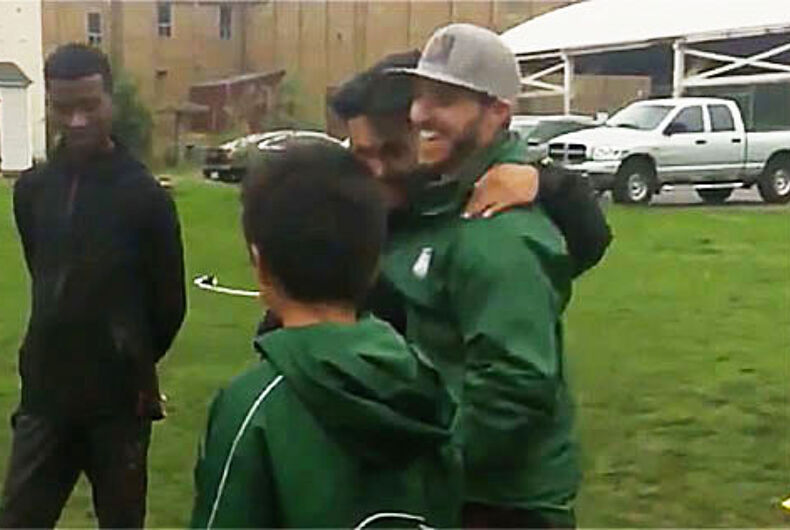 Kaig Lightner, 36, coaches a boys’ soccer team in Portland, Oregon, and he is transgender.

That was a well-kept secret until a week ago, when the Portland Community Football Club posted a video of his coming out to the team before a practice. “It’s still just me,” Lightner told them, after revealing he was assigned female at birth.

One boy’s immediate reaction — “What?” — spoken aloud, seemed to sum up the group’s reaction. Another boy who had been walking away from Lightner at the exact moment he said he was trans, turned around and gave his coach a warm hug and pat on the shoulder.

“I was born a girl,” he told them, as some of the boys giggled. Looking at the man, with his beard, they couldn’t help but laugh, given their ages, and Lightner took it in stride.

But in the end, they formed a circle and did their team cheer, just as they had before.

From video and still photos posted on the group’s Facebook page, it’s clear Lightner’s players are a very diverse group, ethnically. And he told them that despite the privilege he experienced as someone white, he wanted them to know how he was treated when he was their age — differently from every other girl — was likely something to which they could relate.

“I’ll bet you have had things said to you about the color of your skin, or the way you talk, or the country your parents are from. Or any of that. It’s really similar to how I got treated as a kid, too.”

Why is Colin Farrell talking to Ellen about his pubic hair?

Actor Antonio Sabato Jr. will run for Congress in California