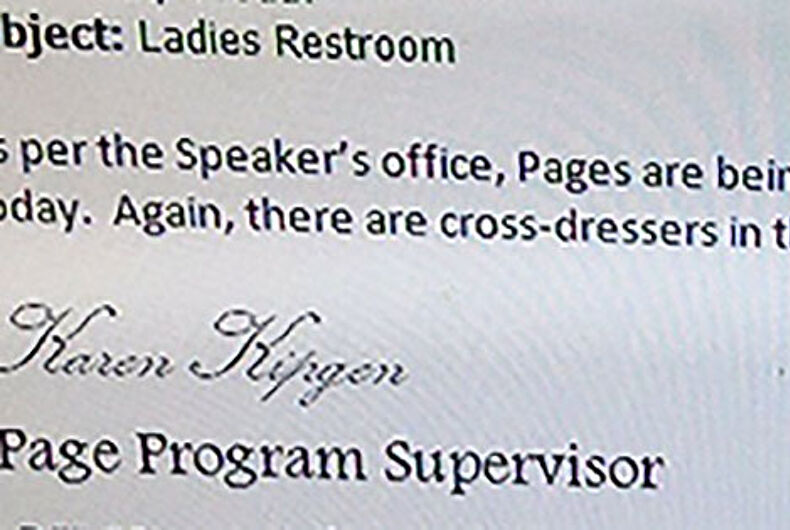 Oklahoma’s Speaker of the House of Representatives issued a strong statement Monday condemning an offensive email from a government official that warned lawmakers about LGBTQ students who were visiting the state house.

The 70 students, escorted by Oklahomans for Equality, were there for HIV Awareness Day. But after word got out about the email, it was their awareness that grew, seeing how some people in the capitol viewed them, as Robin Dorner first reported in The Gayly.

Karen Kipgen, the page program supervisor, had sent an email to members of the legislature and their staff warning them about ladies rooms, and referred to the students using an outmoded term that now more commonly describes a sexual fetish: she called them “cross-dressers.” Several of the students are in fact transgender and gender nonconforming.

Kipgen specifically referred to Rep. Charles McCall in her email, but when group leader Toby Jenkins visited the speaker’s office with his student entourage in tow, McCall’s office said he didn’t authorize the email, that they had no idea what this was all about, said the speaker was busy but promised to look into it.

In a statement emailed to LGBTQ Nation, McCall’s staff acknowledged that “An email was sent by a House staff member to legislative assistants referring to transgender men and women as ‘cross dressers’ and indicating the email was directed by the Speaker’s Office.” Press secretary Jason Sutton refuted that claim in a statement from McCall:

The email was not authorized by me, my staff or my office. It was sent unilaterally by a House staff member without any input or permission. I was unaware that such an email was being sent, and the remarks contained in the email are not condoned by me or the Office of the Speaker. As Speaker, all Oklahomans should feel welcome in the Oklahoma Capitol building. We are looking into this matter, and it will be taken seriously.

Kipgen lists herself on LinkedIn as the sole proprietor of Make My Sale, a company specializing in “staging homes for individuals and realtors to enhance and expedite sales” as well as a MaryKay beauty consultant, in addition to her job as a supervisor for the House of Representatives.

She  has not responded to requests for comment by LGBTQ Nation and the website, Raw Story. But she or someone in her office deactivated her Facebook account after negative comments started to appear on a meme she had shared, according to Raw Story.

It read, “I don’t care if you’re black, white, straight, bisexual, gay, lesbian, rich or poor. If you’re nice to me, I’ll be nice to you. Simple as that. [sic]”

“So what is it those LGBT students did that wasn’t nice to you?” asked one Facebook user. Another called her email “Appalling.”

“My daughter took pride in wearing a very nice, professional suit today to meet with everyone at the Capitol,” wrote Lora Leonard Gambino. “Your words, reducing her down to a cross-dresser, are appalling. I demand you apologize to my kid.”

And Gambino said the email was hardly the only offense her daughter had to suffer:

Adding insult to injury, a bill the students came to advocate for, proposed by Rep. Emily Virgin, to update HIV/AIDS education, which Raw Story reported would have reflected scientifically accurate information, failed during Monday’s House vote.

Spare us the PR spin, here’s what North Carolina should really do to fix itself

Is Russian-owned LiveJournal about to censor pro-LGBTQ blogs & images?