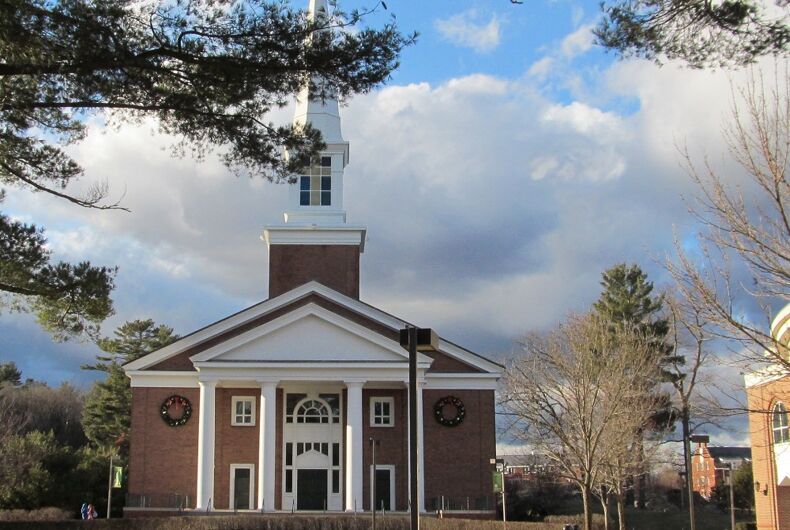 Gordon College is an evangelical Christian school just outside of Boston with around 1700 students. The college has a policy that bans faculty, staff, and students from engaging in “homosexual practice” on- or off-campus.

Sociology professor Margaret DeWeese-Boyd criticized the policy in 2013 by speaking against it in faculty meetings and signing a petition against it.

This past year, DeWeese-Boyd was up for a promotion to full professor. The faculty Senate unanimously recommended her for the promotion, but in February Gordon College president Michael Lindsay refused to promote her.

DeWeese-Boyd asserts in a complaint to the Massachusetts Commission Against Discrimination that she was retaliated against her for advocating gay rights. Gordon College refuses to comment on the decision.

All seven members of the faculty Senate resigned at a meeting last Wednesday, citing Lindsay’s refusal to follow the faculty Senate’s recommendations for promotions. The Boston Globe says that there was another faculty member denied a promotion after advocating gay rights this year, too, but did not name this professor or describe their situation.

A spokesperson for Gordon College told the Chronicle of Higher Education that the chairperson of the faculty Senate “felt the senators could not reconcile divergent views on the process and could no longer be effective in their roles.”

This isn’t the first time Gordon College has gotten headlines for its anti-gay policy. In 2014, Lindsay sent a letter to the Obama Administration asking for a religious exemption to the executive order that required federal contractors not discriminate against LGBT people.

“Without a robust religious exemption… this expansion of hiring rights will come at an unreasonable cost to the common good, national unity and religious freedom,” the letter read.

As a result of the letter, the city of Salem ended a contract that allowed Gordon College to use one of the city’s buildings.

Last year, the ACLU sued Gordon College for retaliating against a professor for advocating gay rights. Philosophy professor Lauren Barthold says that she was removed from faculty leadership positions and threatened with termination as a result of her writing a letter to a newspaper opposing Lindsay’s request for an exemption to the executive order.

Ellen rips United a new one over recent passenger controversies