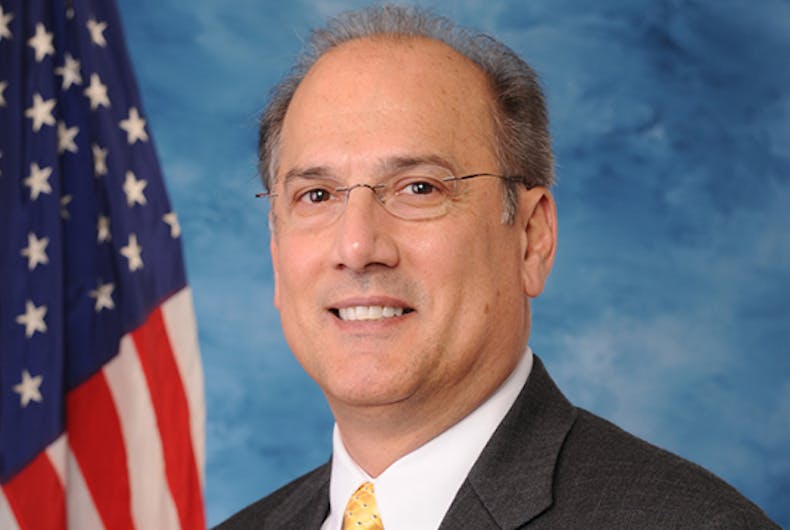 The next director of the White House National Drug Control Policy, colloquially referred to as the drug czar, is expected to be Pennsylvania congressman Rep. Tom Marino, an early supporter of President Donald Trump and anything but a supporter of the LGBTQ community.

“He looks likely, based on my conversations with the White House and folks in Marino’s office” DiGiorgio said on Tuesday.

Marino’s spokesman and the White House declined to comment on the speculation.

Marino has opposed same-sex marriage on numerous occasions, such as when he stated his support for a constitutional amendment banning it on the Christian Coalition voter guide in 2010.

That same year, he answered that marriage should only be between one man and one woman on the Project Vote Smart survey.

In 2013, Marino co-sponsored the Marriage and Religious Freedom Act, to prohibits the federal government from “taking an adverse action against a person for acts in accordance with a religious belief that marriage is or should be recognized as the union of one man and one woman, or that sexual relations are properly reserved to such a marriage.”

He voted against reauthorizing the Violence Against Women Act, in 2013, which, in part, moved to define “‘underserved populations’ as populations that face barriers in accessing and using victim services because of geographic location, religion, sexual orientation or gender identity.”

While Marino balked at protecting women, he did co-sponsor a bill to make an attack on a police officer a hate crime. He is also a supporter of the death penalty.

Marino worked as an attorney in private practice before winning an election to become district attorney in 1991. He then served as U.S. attorney in Pennsylvania’s Middle District under President George W. Bush. He is currently in his third term representing Pennsylvania’s 10th congressional district.

In 2010, Marino was filmed shouting at a protester outside a campaign event in Williamsport, asking the man, “What do you do for a job? What kind of welfare are you on?”

He has also faced corruption scandals throughout his career, Right Wing Watch reports:

In 2007, Tom Marino resigned from his position as US Attorney in Pennsylvania after a corruption scandal clouded his career and raised questions about his honesty. Marino had used his official title as US Attorney to provide a reference in 2005 to his “close friend,” convicted felon Louis DeNaples, who was trying to win the state gaming commission’s approval to open slot machines at a resort he owned. When his office began an investigationinto DeNaples for lying about his ties to organized crime, Marino’s assistants uncovered his reference and notified the Justice Department, which transferred the investigation out of Marino’s office. But questions about Marino’s ties to DeNaples remained.

When the Justice Department launched an investigation into Marino’s actions, he resigned and promptly took a $250,000-a-year job as “DeNaples’ in-house lawyer.” Marino later under-reported his income on his financial disclosure forms, reporting that he only received $25,000 from DeNaples. Even Zack Oldham of the conservative blog RedState said of Marino’s actions: “The reality is just as bad as–if not worse than–the optics of this scandal.”

The DeNaples affair wasn’t even the first time Marino had run into corruption accusations. When Marino was District Attorney in Lycoming County, he tried to get a friend out of a drug charge by going behind the back of the county judge who had refused to toss out his friend’s conviction. According to the Luzeme County Citizens Voice, Marino “approached another judge and won the expungement, but the plan backfired when the second judge learned of the first judge’s involvement in the case.”

Is Fox’s Bill O’Reilly about to get fired?