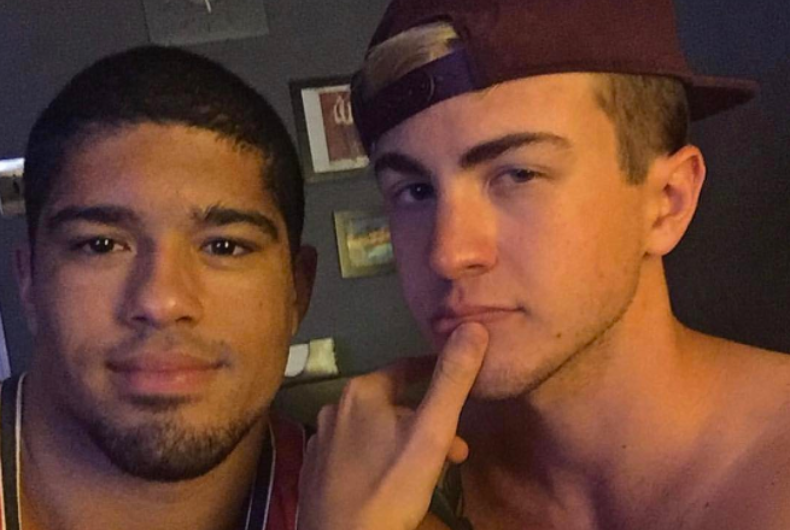 Professional wrestling walks a fine line between homoeroticism and a homophobic hypermasculinity. Men rolling around in shiny underwear with dramatic flair…while acting out “brutal” assaults. And while it’s one thing to wrestle nearly naked men in front of a crowd, it’s apparently another to do it in one’s bedroom.

So it’s no surprise that professional wrestler Anthony Bowens was hesitant to come out to his fellow wrestlers and fans.

“I’ve loved pro wrestling ever since I was 5 years old and I didn’t want my experience ruined because of other wrestlers thinking I got into it for the wrong (sexual) reasons,” Bowens writes for Outsports. “The ring is my sanctuary, where nothing else matters. I couldn’t bear to think that if I came out, I’d spend most of my time worrying if the person I was wrestling was uncomfortable and didn’t want to work with me.”

To make matters more complicated, his career was started to pick up. Over the past four years, Bowens has worked as a wrestler and fitness model, traveling internationally, appeared commercials for World Wrestling Entertainment (WWE), and performing on WWE shows “Raw,” “Smackdown,” and “NXT.”

But then he met Michael. While Bowens has also known he was bisexual from a young age, he had never really dated. So when he clicked with his now-boyfriend, a new world opened up to him.

“Meeting Mike was a turning point in me being comfortable with myself in all settings,” Bowens says. “It was my first relationship and it was with a guy.”

Who ever said you can't pick up guys at the gym? Lol This was our best attempt of making fun of fitness couples. Happy Valentine's Day @michaelpavano

The couple did couple-y things and posted a goofy video of the two doing a “laughing challenge” to Michael’s YouTube page.

“The video was a blast to do, but I worried that someone from the wrestling world would stumble across it and learn my secret. I decided to let it be posted anyway,” Bowens recalls. “Weeks later, I received a text that made my stomach drop.”

He’d made a particular effort to remain closeted from his best friend in the wrestling business and his buddy had finally seen the video, after being tipped off by other wrestlers. But the response surprised him. His friend was cool with it.

Still, now that the news was out, Bowens knew he had a decision to make.

Recognizing the sacrifice his boyfriend made remaining discreet as he navigated his exit from the closet, Bowens decided to come out to his friends and family via Facebook on January 8:

I’m not going to make this a long winded post but I think it’s time. Just wanted to let everyone know im Bisexual. I look forward to changing perceptions and breaking stereotypes as I continue on my journey. I have zero patience for negativity so if this bothers you please delete me. Thanks!

Bowens says the response was “overwhelmingly positive,” with the post receiving 986 likes and more than 200 positive comments.

I'd like to introduce you to my better half @michaelpavano. Give him a #follow, he's kinda cool haha

“I couldn’t help but cry as I let loose all of the years of stress, anxiety and fear of judgment,” he writes. “It was the best decision I had ever made.”

Now, Bowens is living out loud in an effort to bust stereotypes and encourage others to come out.

“I realized I have a unique platform to spread awareness about ongoing issues in the world, to break stereotypes and show everyone that they can be themselves and do what ever they put their minds to no matter what their sexuality is,” he says.