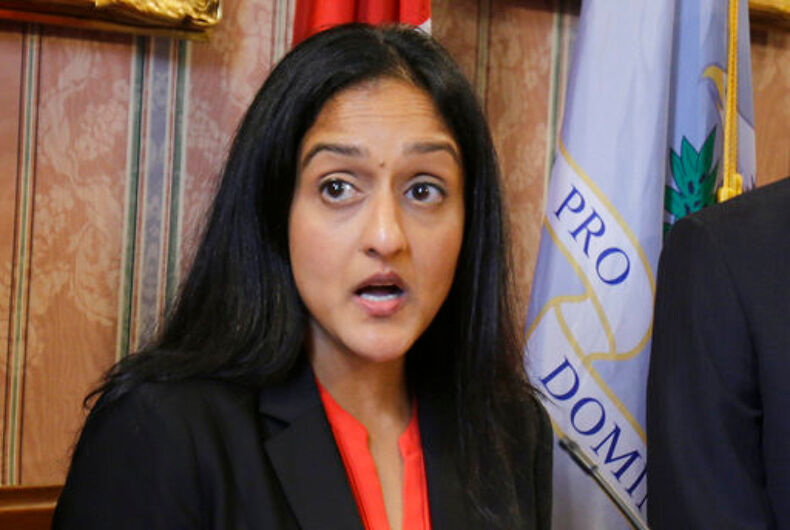 FILE - In this May 26, 2015 file photo, Vanita Gupta speaks in Cleveland. Gupta, the Obama administration’s top civil rights lawyer will lead a coalition of civil and human rights organizations at a time when they fear the Justice Department will soften its stance on criminal justice reform. (AP Photo/Tony Dejak, File)Photo: AP

The Obama administration’s top civil rights lawyer announced Thursday she will lead a coalition of civil and human rights organizations at a time when they see the Justice Department softening its focus on a number of their priorities.

Vanita Gupta, who was head of the Obama Justice Department’s Civil Rights Division, said she will become the new president and CEO of The Leadership Conference on Civil and Human Rights amid an “unprecedented assault on civil rights.”

New Attorney General Jeff Sessions has indicated the department will shift dramatically from many of the policies Gupta implemented. Sessions has said already the department will pursue fewer wide-ranging federal investigations of police departments. Those inquiries were a staple of the Obama administration efforts to overhaul troubled agencies after racially charged encounters. Sessions’ Justice Department abandoned a challenge to a key aspect of Texas’ voter ID law. And it reversed a directive Gupta signed telling schools to let students to use the bathrooms that match their chosen gender identity, among other striking changes.

During Gupta’ time at the department, the federal government inserted itself in various matters on behalf of transgender people, prisoners and the homeless.

“What we’re seeing is an unprecedented attack on so many of the gains we made,” Gupta said. That “requires relentless persistence and effective leadership to push back.”

Gupta starts her new position with the coalition representing more than 200 national civil rights groups on June 1. She replaces Wade Henderson, who led the organization for more than 20 years.

“Having been on the inside and the outside gives me a fairly unique perspective on the way that government can create obstacles but also be a real lever for change,” she said.

Marketer seeks branding help from The Gays in hilarious sketch