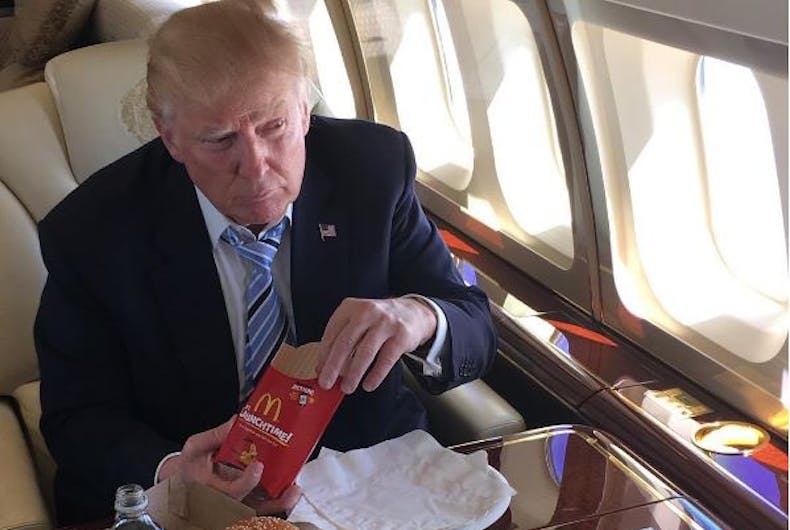 Trump shared a photo of himself eating McDonald's to social media to celebrate clinching the Republican nomination.Photo: Instagram

President Donald Trump is a fan of McDonald’s, but a tweet sent out by the company’s official Twitter account on Thursday morning suggested the feeling is not mutual and it would prefer former president Barack Obama to make a comeback.

“You are actually a disgusting excuse of a President and we would love to have @BarackObama back, also you have tiny hands,” the tweet, pinned to the top of its account, read. The anti-Trump tweet was deleted within half an hour, but not before it could be screenshot and saved, reports Mediaite.

The tweet is likely the work of a rogue employee or a hack. LGBTQ Nation has reached out to McDonald’s for comment but we have yet to receive a response. We will update if more information becomes available.

Trump’s history with the fast food giant also includes an appearance opposite Grimace in a McDonald’s commercial.

UPDATE: McDonald’s has tweeted out that its account was compromised and that it is investigating.

Based on our investigation, we have determined that our Twitter account was hacked by an external source. Read more: https://t.co/X5NwVI5sKp

“Based on our investigation, we have determined that our Twitter account was hacked by an external source,” the company said. “We took swift action to secure it, and we apologize this tweet was sent through our corporate McDonald’s account.”

After someone made an anti-gay comment, this funeral erupted in gunfire