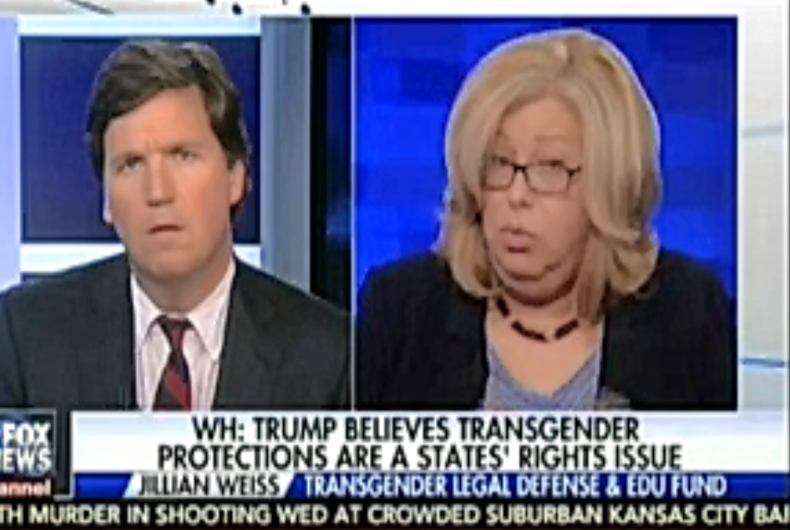 Tucker Carlson invited Transgender Legal Defense and Education Fund executive director Jillian Weiss to talk about bathrooms, and he generally refused to listen to her.

Carlson appeared very concerned that he could simply decide that he’s a woman and use the women’s bathroom “tomorrow,” and Weiss explained that being transgender doesn’t work that way. “The idea that there is no objective factors to be considered in who is transgender and how we determine bathroom use is really not the way that this works. The fact is that people makes this decision after a lot of serious consideration, they see medical doctors, there is psychologists involved. There’s a lot to think about. It’s not an easy process as someone who’s gone through that I can tell you just don’t decide tomorrow. That’s really not the way it works.”

Carlson responded that he could claim to be a woman the “tomorrow” and that there’s no way to tell if he’s sincere, obviously not having listened to Weiss’s answer.

He went on to claim that there is $11 billion in gender-specific federal programs. Carlson did not say where he got this statistic and what programs it was referring to, or even the period of time it covers (the federal budget is commonly described in both one-year periods and ten-year periods).

He continued to be snide, saying that since there isn’t a single, common standard used to determine gender identity by every organization concerned with gender, that transgender rights should be put on hold.

Agitated, he finally said, “I’m saying don’t give $11 billion of way to people who are faking!”

Weiss responded, “Where’s your evidence of faking? Tell me who faked it and we can discuss it.”

The segment ended there. At no point did Carlson prove that he was a man or even described the universal criteria that we can use to determine whether he is a man.

Gay teacher comes out to school, gets ‘phenomenal’ response