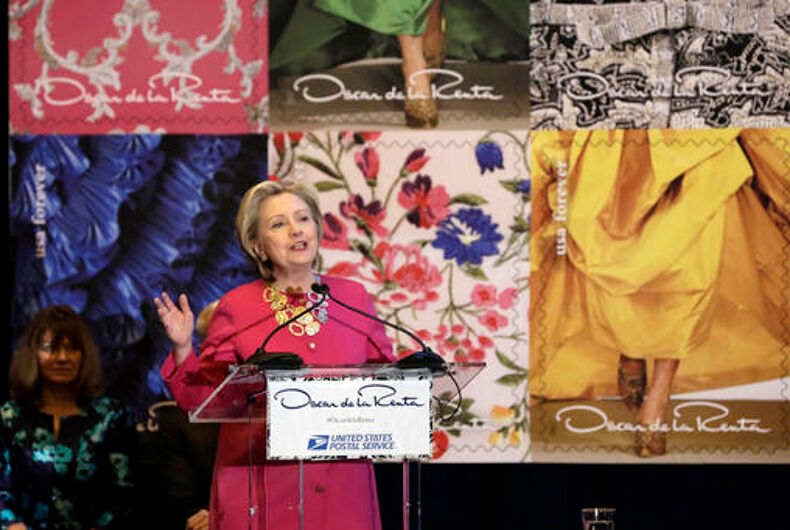 NEW YORK (AP) — “When you have a voice, you should use it,” designer Raf Simons says. The new Calvin Klein designer did just that, using a particularly pointed David Bowie lyric on his soundtrack. Tracy Reese brought actual poets to her show, with soulful messages of empowerment. Naeem Khan played a reading from Maya Angelou. And Prabal Gurung sent a parade of T-shirts down the runway with feminist slogans.

Certainly, not every designer at New York Fashion Week wanted to wade into the nation’s political or social situation. But a number did decide to use their voices in ways as varied as the clothes they were presenting. Here are a few key moments — political and not:

There was audible buzz as a celebrity-studded crowd waited to see what Belgian designer Raf Simons, making his heralded debut for Calvin Klein, would do for the iconic American brand. Then came the strains of “This Is Not America” by David Bowie. The label had also sent guests white bandanas to wear in support of “unity, inclusion, hope and acceptance.” The clothes themselves were a hit, reflecting the diversity of American fashion by using everything from cowboy shirts and Amish quilts to striped tube-sock sleeves and plastic-encased feathers.

Some designers turned to poetry to express their thoughts. Reese went further, actually enlisting four female poets for her show in an antique-filled, 19th-century West Village townhouse. As the models posed — in corners, on sofas, by bookshelves — the poets read inspirational messages of female empowerment. Reese wore a white T-shirt with a quote attributed to Angela Davis: “I’m no longer accepting the things I cannot change, I’m changing the things I cannot accept.”

The red baseball caps and cutoff sweatshirts on those models for Public School bore a tongue-in-cheek message: “Make America New York.” Designers Dao-Yi Chow and Maxwell Osborne, who specialize in edgy streetwear, also emblazoned some of their garments with the phrase, “We Need Leaders.”

For an emotional finale, Gurung sent his models out in simple T-shirts: “The Future is Female,” ”My Boyfriend is a Feminist” and “Girls Just Want to Have Fundamental Rights.” There was also “Nevertheless, She Persisted” — the phrase used about Sen. Elizabeth Warren that has become a popular slogan. And then Gurung emerged, in a shirt that said: “This is What a Feminist Looks Like.” The soundtrack played a cover of John Lennon’s “Imagine.”

Proenza Schouler had a different message: Goodbye to New York, for now. The label is moving its runway shows to Paris next season, and wanted to pay tribute to the energy of New York, its real home. Backstage, designers Lazaro Hernandez and Jack McCollough made clear that they meant political and social energy. “For us, it’s not a time for sitting at home in a bathrobe and slippers and being comfortable,” Hernandez said, rather to “go out there and you stand for what you believe in and you fight for the things you want.”

The late, legendary Dominican-born designer still looms large over American fashion. First, his newly minted successors — Laura Kim and Fernando Garcia, taking over from Peter Copping — sent an energizing jolt through the label, infusing their debut collection with a more casual, witty spirit while still maintaining a respect for luxurious detail. (In a twist, they showed their de la Renta collection simultaneously with their own, young label, Monse.) Then, no less than Hillary Clinton, Michael Bloomberg and Anna Wintour showed up to honor him — and his immigrant past — at a ceremony unveiling new Oscar de la Renta stamps.

The Indian-born American designer — a favorite of former first lady Michelle Obama — saved his best item for last, sending out an elaborate bridal gown in glimmering golden embroidery on filmy black fabric, topped by a golden floral crown and a cascading veil. On the soundtrack: Maya Angelou reading her poem “Human Family,” which ends with the line: “We are more alike, my friends, than we are unalike” — repeated three times. Backstage, Khan spoke out against President Donald Trump’s travel ban.

The German designer who usually shows in Milan brought his larger-than-life, chaotic circus to town, with Tiffany Trump and Madonna in his front row and “hot felon” Jeremy Meeks on his runway. He’s trying to push deeper into retail in the United States and took on a patriotic theme, lighting up his venue at the New York Public Library in red, white and blue and including models dressed as the Statue of Liberty.

West was back, but showing before a much smaller crowd than his past outings. He also bypassed the traditional end-of-show bow done by most designers, and started only 20 or so minutes late — as opposed to his usual VERY late — in presenting Yeezy Season 5. Wife Kim Kardashian West watched along with the crowd as images of West’s models rotated slowly on a giant four-sided screen. Models then appeared for a traditional finale. The Wests have been keeping a lower profile since her Paris robbery, and his hospitalization for exhaustion.

Browne wasn’t talking about politics at all — actually, he was talking about penguins, ice skates and a concept called Gesumptkunstwerk, meaning a piece of total art. And art it was: Browne had constructed a winter wonderland of gray tweeds and wool and flannel, complete with a lake, a rowboat, a penguin atop a rocky embankment, and human lampposts. As for the clothes, Browne found 50 different ways to show how precise tailoring can elevate a simple suit.

Sometimes the way to have the last word is … silently. Marc Jacobs closed out Fashion Week with a hip-hop themed runway show that was utterly quiet — no music, just the noise of the models’ feet tapping as they made their way across the unadorned floor of the Park Avenue Armory. Guests sat in two rows of metal folding chairs, facing each other. One didn’t even hear the usual clicks of cameras: Photographers were kept on the street, where the models later came out to pose. Outside, speakers blared with music — and the models appeared to be taking photos of the spectators.