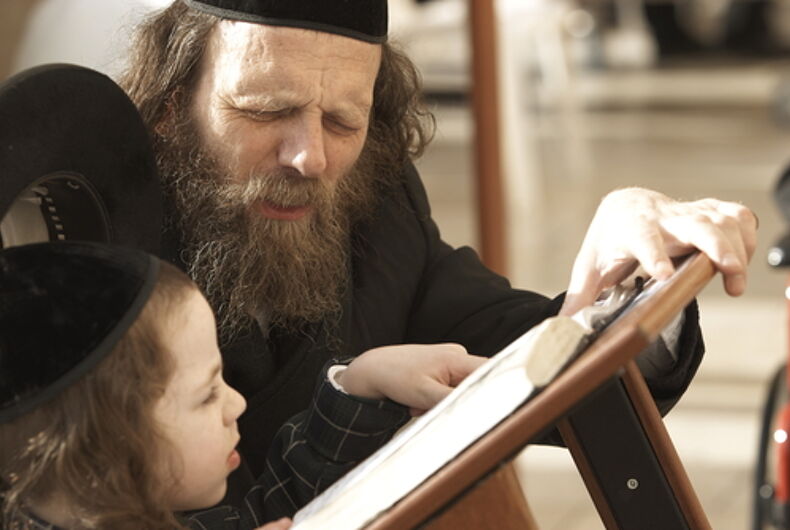 Just one month after a British judge’s controversial decision to block a transgender woman from any and all physical or verbal contact with her children for fear they would be ostracized, a report says those fears have nonetheless come true.

The Jewish Telegraph reports one of the woman’s five children is being shunned by classmates at their private Orthodox Jewish school, who “have been told not to communicate with her ‘in any way’. The instruction came from their teachers, they say.

The Independent reports Justice Peter Jackson has written to the U.K.’s top education official, warning that social banishment of trans people’s children in strict Jewish schools may be illegal.

“There is, to say the least, evidence that the practices within the [ultra-Orthodox Jewish] community, and in particular its schools, amount to unlawful discrimination against and victimisation of the father and the children because of the father’s transgender status.”

Judge Jackson set the events in motion at a custody hearing in which he ordered the trans woman to stay away from her children. Her only means of communication is that she is allowed to write them letters four times a year.

One teacher at the school, which is not being named to protect the child’s privacy, predicted exactly this outcome.

“When a child is from a home that experiences negative changes within the framework of religion we keep or the way in which we choose to observe it, problems arise with the child’s school place.

“Whilst the School will make every effort to support the family in question, where there is risk of negative influences from the outside world to other children in the School, the School will experience tremendous pressure from the Parent body and the governors not to allocate a place to any child who will bring these potential risks. It would therefore be very difficult for the School to process an application for a child who fits the above description.”

Religious bigotry is banned by law in the U.K. All schools must promote tolerance, inclusion and respect for people who are LGBTQ, and cannot refuse admission to children on the basis of whether they or a family member is LGBTQ.

But a rabbi who testified at that custody hearing said this kind of discrimination is part of their ultra-Orthodox faith, setting up a potential American-style conflict between civil rights and religious freedom:

“Knowledge of transgender amongst children in the Ultra-Orthodox Jewish community is almost non-existent, for the reasons mentioned above concerning their lack of access to Internet and the media,” Rabbi Oppenheimer said. “Community members will expect the family of the transgender person to limit their contact with him or her as far as possible.”

That, said the rabbi, is “the price we pay – we limit ordinary social contact so that we transmit our spiritual ethos to the next generation.”