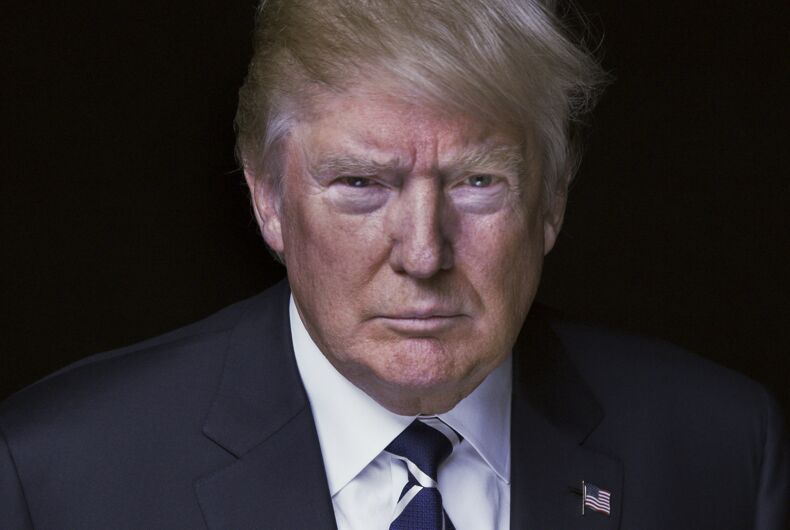 Since the election of Donald J. Trump as the 45th President of the United States, a contentious debate has surfaced in public institutions that receive federal or state funding centering on whether they should display Trump’s portrait in buildings once Trump takes office.

Officials at the Fire Department of New York, for example, have banned firefighters from hanging or otherwise displaying pictures of President-elect Trump in firehouses or on trucks and other equipment. A memo delivered recently requested the department to “remain out of the political scene and out of the political field.”

Though New York firehouses have displayed photographs of past presidents, including George W. Bush standing at the World Trade Center holding a megaphone and Barack Obama when he visits FDNY facilities, officials took this action of prohibiting Trump’s image following community complaints that a fire truck in Brooklyn affixed a Trump mask to its grille.

This official FDNY action has generated controversy throughout the department, and has forecast a growing storm in the aftermath of a polarizing election.

An increasing number of public school educators and students of numerous social identities, as well, are debating (a.k.a. arguing) whether Trump’s image should hang on the walls of their campuses.

I met with students and educators, and I put out the word on social media that I would like to get their views on the current “portrait” controversy. Though certainly not a scientific study, I was able to take a snapshot into the minds of those who confided in me.

Some, though certainly not all, schools have routinely posted current presidents in their main offices, and in some cases in libraries, and at the discretion of teachers in their classrooms, However, because of Trump’s often xenophobic, misogynist, racist, Islamophobic, homophobic, and ableist rhetoric and behavior, quite a number of members of the school community, including students in particular, who already feel socially marginalized in the current cultural and political climate, argue that they would find pictures of the new president triggering both emotionally and physically.

Speaking with a group of public university students, a major theme I found surfacing was that until the election, they had not been “political” and were “uninterested.” The election of Trump, however, was a loud and clear wake-up call. Each student committed to process their feelings and to take actions from then forward.

University students, siblings at another campus, said that directly following the election, they called their mother every day for a week in tears of concern for the fate of the country and for undocumented friends and their families who now live with increased and constant fears of deportation.

When I met with high school juniors and seniors in an LGBTQ history class, to a student, all expressed anger and fear at Trump’s election. One student expressed the sentiments of their classmates:

“No longer do people hold politicians to standards of behavior that they hold for high school students. It’s okay for the President-elect to grab women’s genitals, but if I did it, I’d be thrown out of school and thrown into jail.”

Every student in this class bristled against even the thought of Trump’s portrait looking “down” on them.

We are increasingly seeing what has come to be known as “The Trump [Bullying] Effect” in which through Donald’s contemptuous and abusive words and actions, many young people mirror his behavior and react similarly against their peers.

Even before the election concluded, a public-school educator told me, “As we get closer to the election, I’m seeing more and more of my students of marginalized identities struggle — seriously, deeply struggle — with their mental and emotional health, to the point of discussing suicide….I suspect that I’m not alone in what I’m seeing, and that it’s happening on other campuses as well.”

Educators in my study uniformly expressed concern, at best, over their schools posting Trump’s image.

A high school history teacher remains somewhat hopeful, saying, “Unfortunately, he is going to be the President. If the school has posted Presidents in the past, it seems like they have to do this one no matter how distasteful. Luckily, we don’t do this in our school. I could imagine how difficult it would be to see him every day since he represents so much that I find abhorrent. We can’t ignore that he is President. If his image is posted, maybe it will be a reminder to resist?”

“I suppose it [posting Trump’s portrait] could be a potentially divisive issue if a particular school allows it to become so…However, if we are raising critical thinkers as we are tasked through the Common Core, then students might want to prepare their arguments. In fact, it could be turned into an entire lesson on argumentation,” they said.

One teacher related this to the controversy regarding whether to stand for the Pledge of Allegiance, saying, “[M]y 6th graders were all standing up for and reciting the Pledge of Allegiance without knowing why. Then we did a lesson using [San Francisco 49ers quarterback] Colin Kapernick’s defiance in the face of the national anthem, and after making up their own minds, most of them (I work in a high poverty school where I’m the only white face in the room) chose to sit through it. (This also gave me the power to not have to stand up myself as an example, allowing me to exercise my objections for religious reasons).”

In addition to this teacher, others I heard from expressed their belief that whether to post Trump’s portrait will turn into a contentious issue only if educators decide and dictate on their own without facilitating student discussions in classrooms and schools at large.

Though elections traditionally result in tensions and rifts between colleagues within social institutions, the recent election has seen particularly intense divisions. According to one educator, “…since the elections, which at work is a ‘No Talk About thing’ because screaming fights have broken out in the Teacher’s Room. This has been the worst thing I have seen since I began working there. The teachers and staff have been at each other’s throats about why they think Donald Trump is a better person for our country and why Hillary isn’t and vice versa.”

A public-school counselor who coordinates a Gay Straight Transgender Alliance and sees the real-life consequences of an often non-supportive society, remains less hopeful in the current climate.

“My kids are quite savvy, and follow politics to some degree,” the educator says. “One of our strongest members is an eighth grader who came out as gay last year. He’s very bright, well-informed, conscientious, and outspoken. He tried very hard to find commonalities with his Trump-supporting parents. He struggled more and more after the election, finally he broke down stating he’s not a gay, and now fears rejection and humiliation from the very people who’ve been supporting him. Suicidal, he was hospitalized. Donald Trump’s bullying and hateful rhetoric separated him from his parents, then himself, and then potentially from his support network.”

Regarding the displaying of Trump’s picture at school, a counselor believes, “It’s like running a swastika up the flagpole!”

And the controversy rages. Time will tell whether this “portrait” storm spreads throughout the social climate of our land. But one thing remains certain, as the English idiom has long made clear…

A picture is worth a thousand words – and just as triggering.

Back to the future: Why is Donald Trump stuck in the 80’s?