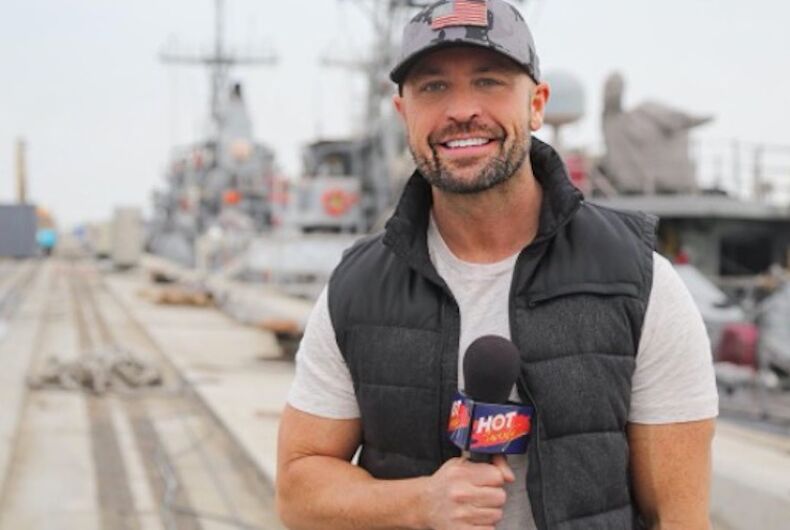 CMT and iHeartRadio host Cody Alan has come out as gay, via an Instagram post on Thursday.

In an open and heartfelt message, Alan wrote, “there is something I want to share with you. You see, I’m gay. This is not a choice I made, but something I’ve known about myself my whole life.”

2017. As we start a new year, there is something I want to share with you. You see, I’m gay. This is not a choice I made, but something I've known about myself my whole life. Through life's twists and turns, marriage, divorce, fatherhood, successes, failures – I've landed on this day, a day when I'm happier and healthier than I’ve ever been. And I’m finally comfortable enough for everyone to know this truth about me. Thanks for following me and supporting me over the years. As we continue our journey, I hope this news won't change how you see me. I’m still the same Cody I always was. You just know a little more about me now. My hope for the future is to live the most honest, authentic, loving, and open life possible. Here's to being happy with yourself, no matter who you are, who you love, where you come from, or what cards life has dealt you. Thanks again. With much heart, Cody

Alan spoke with People Magazine about his struggle to finally come out publicly, doing so at the age of 44.

“Though my TV or my radio persona was always that of a happy guy, there was this underlying ache inside of me for years, so I decided either I was gonna do something about it, or I was gonna live with this layer of misery underneath that happy face on the TV,” he said.

“Once I realized it was okay to accept the truth, that it wasn’t my choice, it was a lot easier to start figuring out where to go with my life next,” he continued. “I’ve wanted to share this part of my life, but I now have gotten to the point where it just feels right, and I’m at peace with where I am enough to be able to express it.”

“I struggled with my sexuality starting at a very young age,” he said. “I remember having distinct feelings early in my life. I knew this about myself, and I had a really hard time dealing with it. I was so ashamed of who I was.”

“I felt like getting married was what I was supposed to do. It’s what everyone wanted me to do, and I felt, somehow, like maybe that’s what would make me straight — and obviously that’s not how it works! But I dreamed of that family, which I now have.”

He expressed what he was feeling and going through to his wife ten years ago, and they decided that they couldn’t allow the marriage to continue.

“Everyone needs to give 100 percent of their heart for a true, committed relationship,” Alan said. “But ultimately, my ex and I knew there was no way that could ever happen.”

He began coming out to his close friends and family, and was met with support.

“You realize very quickly that people are very loving and accepting and supportive. And you feel like it’s good for you to share that most sincere truth about you.”

Alan is now in a relationship with an occupational therapist, named Michael Smith.

“He’s an amazing person — incredibly strong and confident and loving — and he’s really helped me face these battles,” Alan said. “He’s already battled so much of what I’ve been or am going through, so his strength has boosted my own confidence.”

As for why he felt it important to come out to the fans, the South Carolina native said he wants to be a change maker.

“I would like to be a voice that can speak to people who are facing challenges that we all face, for struggles that we all come across, because we’re all going through something. To be able to say: There is life, and you can find it, and take steps to improve yourself based on what you know,” he said. “If I could be someone who’s vocal about facing struggles and overcoming them, I’d like to be.”

“Even if it’s just one person that hears it and says, ‘I like country music and maybe I’m not so different after all.’ There’s some person out there who’s loving country music and thinks they don’t fit in, and that’s not true: You do fit in here, and there’s a place for people who are different.

“That diversity is what we should celebrate.”