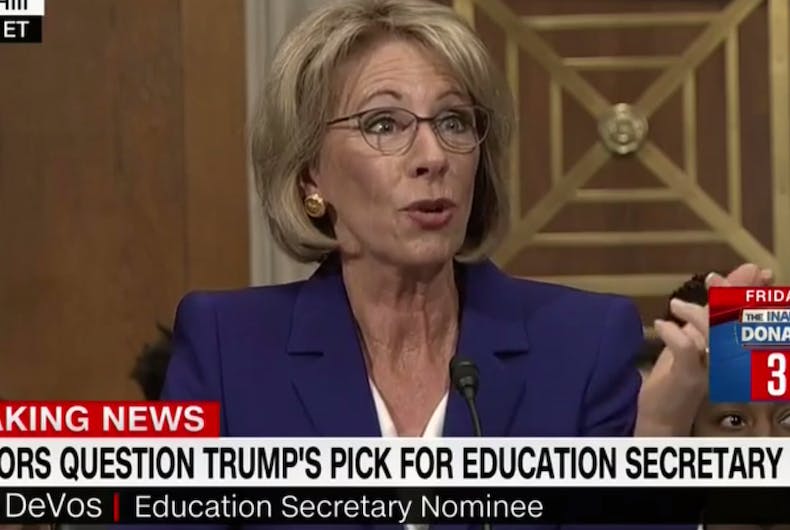 The nomination of Betsy DeVos to be President Trump’s secretary of Education has hit yet another stumbling block in the eyes of “Truth Wins Out,” an anti-reparative therapy group that advocates for LGBTQ children and their families.

In a news release Monday, TWO unleashed a video that it says shows an extremist organization funded by DeVos was intent on the indoctrination of youth in the mold of “Stalin, Hitler and Lenin.”

The organization is the Michigan-based Student Statesmanship Institute, or SSI, which presents a “biblical worldview” to teens who are from private Christian schools or homeschooled, in a training academy for careers in politics, law, media, and business.

That claim appears in a 2013 video dug up by TWO researcher Bruce Wilson, titled “SSI: Celebrating 20 Years.” Former Michigan Lt. Gov. Dick Posthumus — who is now an adviser to Gov. Rick Snyder —  said “Joseph Stalin, Adolf Hitler, Vladimir Lenin, they knew one thing – that to change a culture, to change a country, you had to reach the children.”

“Stalin, Hitler, and Lenin are inappropriate role models for educating children,” said Truth Wins Out Executive Director Wayne Besen. “Betsy DeVos’ history of funding extremist organizations makes her uniquely unsuited to be Secretary of Education. It seems like a more befitting title for DeVos would be Secretary of Indoctrination.”

According to TWO, DeVos was a longtime participant in SSI and listed on the SSI advisory board through 2015.

According to SSI’s own website, its students “are given a variety of Biblical issues to study: Truth, Mercy and Justice, The Nature of Man, The Blessings of Ten Commandments, Lordship of Christ, Homosexuality, Sanctity of Life, Inspiration and Inerrancy of the Bible, Self-government and Self-control, Sanctity of Marriage, and Civil Government.”