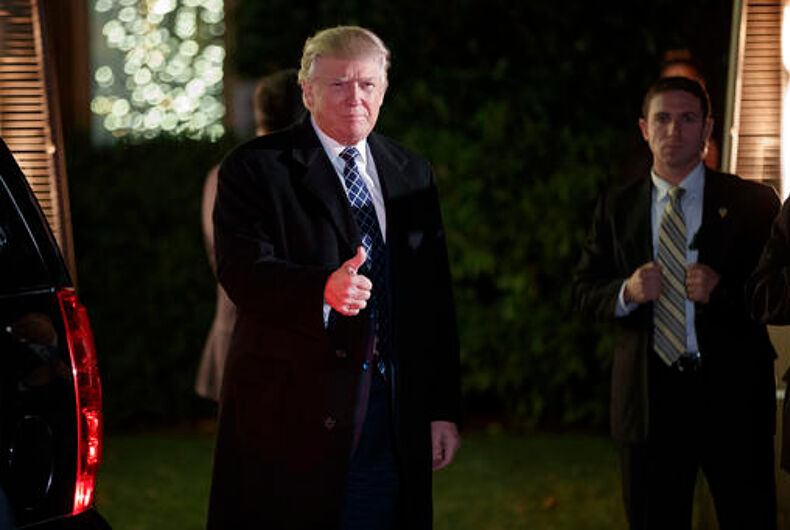 President-elect Donald Trump gestures toward reporters as he arrives for a party at the home of Robert Mercer, one of his biggest campaign donors, Saturday, Dec. 3, 2016, in Head of the Harbor, N.Y. Photo: (AP Photo/Evan Vucci)

Trump, who did not sport a costume, reveled with guests at the Mercer family estate for the annual Christmas party; this year’s theme was “Villains and Heroes.” When asked what costume he was wearing, Trump — who was sporting his usual dark suit — simply pointed at himself and mouthed “me.”

An invitation to the annual December party is a coveted ticket in Republican circles, never more so than this year. Several strategists who helped engineer Trump’s upset win were attending, including incoming White House senior counselor Stephen Bannon and senior aide Kellyanne Conway. Conway was dressed as Superwoman; Bannon did not wear a costume.

Both Conway and Bannon have close ties to Rebekah Mercer, the daughter of hedge fund manager Robert Mercer. The younger Mercer became one of Trump’s leading and most influential donors and urged him to bring Bannon and Conway into the campaign in August.

Rebekah Mercer, who ran a pro-Trump Super PAC, had compared the electoral race between Trump and his Democratic opponent Hillary Clinton to an “apocalyptic choice,” so the night’s “Villains and Heroes” theme was perhaps fitting.

The “Owl’s Nest” estate was decorated with depictions of good and evil, such as angels and devils. Even the party staffers’ costumes were split: some were dressed as Hell’s Angels motorcyclists, some as Salvation Army volunteers.

Trump’s sojourn to the party was his only expedition on Saturday outside the Manhattan skyscraper that bears his name. He is expected to lay low the remainder of the weekend, before returning to transition meetings in New York on Monday and the next stop of his “thank you” tour in North Carolina on Tuesday.

Trump is also still mulling his choice to lead the State Department, one of the most powerful and prominent Cabinet positions.

According to two people close to the transition, Trump is moving away from two of the front-runners for the job, former New York City Mayor Rudy Giuliani and Mitt Romney, the 2012 GOP nominee. Giuliani’s international business ties and public campaigning for the job are said to have rankled Trump. And while Trump has met twice with Romney, he’s said to be aware of the risks of angering his supporters by tapping a Republican who was among his fiercest critics.

Former CIA director David Petraeus is still in the mix, though both people close to the transition said Trump’s prolonged decision-making process has left the door open to other options.

One of the sources said Trump was open to expanding his short list of secretary of State prospects. Among the possibilities: Jon Huntsman, a former Republican Utah governor who also served as the ambassador to China and speaks Mandarin.

The people close to the transition insisted on anonymity because they were not authorized to discuss the private process publicly.

Trump also refused to answer questions outside the party about his decision to speak on the phone with Taiwan’s leader, a breach of long-standing tradition that risks enmity from China.

Trump’s conversation with Taiwanese President Tsai Ing-wen drew an irritated, although understated, response from China, as Foreign Minister Wang Yi said Saturday that the contact was “just a small trick by Taiwan” that he believed would not change U.S. policy toward China, according to Hong Kong’s Phoenix TV.

Chinese officials said they lodged a complaint with the U.S. and reiterated a commitment to seeking “reunification” with the island, which they consider a renegade province.

After the phone conversation Friday, Trump tweeted that Tsai “CALLED ME.” He also groused about the reaction to the call: “Interesting how the U.S. sells Taiwan billions of dollars of military equipment but I should not accept a congratulatory call.”

© 2016, Associated Press, All Rights Reserved.
This material may not be published, broadcast, rewritten, or redistributed.
News (USA)
Donald Trump