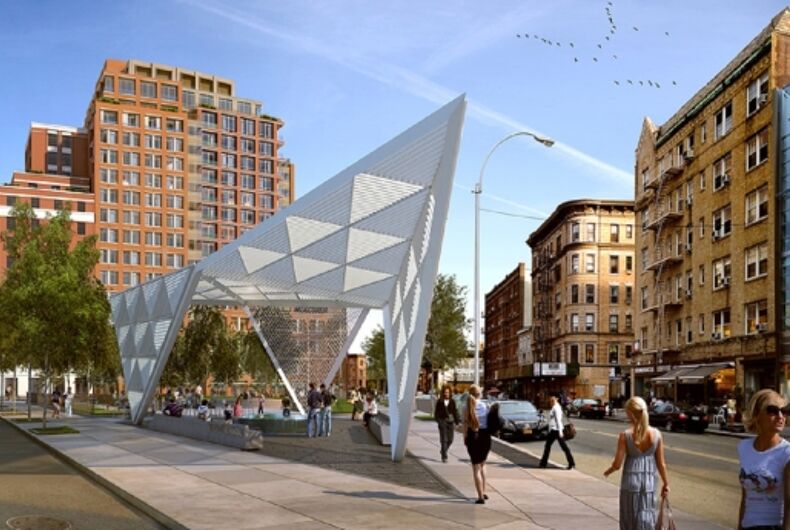 The project has been in the works for over five years and is located in the West Village, in Manhattan, across from the former St. Vincent’s Hospital, which opened one of the country’s first dedicated AIDS wards in 1984.

“The New York City AIDS Memorial Park at St. Vincent’s Triangle stands at the crossroads of the richly historical West Village. Here, we honor and celebrate St. Vincent’s Hospital’s more than 150 years of service to our city, as well as the countless New Yorkers impacted by AIDS: those we have lost, those who live with HIV/AIDS, and those who continue to battle against fear and ignorance,” Parks Commissioner Mitchell Silver said.

At the NYC AIDS Memorial, St Vincent's Park. A man diagnosed 5 yrs ago told me: "It's surreal to look at a memorial I was almost a part of." pic.twitter.com/nZgKeIi0Wk

“The public dedication of the New York City AIDS Memorial marks the culmination of over five years of planning and development to build the memorial, which involved significant private and public support. The Memorial project was launched in 2011 to recognize and preserve the history of the AIDS crisis through the creation of a memorial to honor New York City’s 100,000+ men, women and children who have died from AIDS, and to commemorate and celebrate the efforts of the caregivers and activists who responded heroically to the crisis,” a statement read.

On #WorldAIDSDay, huge crowds turn out for dedication of @AIDSMemPark pic.twitter.com/yDKUcSqMOo

“It is heartening to know that the new NYC AIDS Memorial Park at St. Vincent’s Triangle will create a powerful sense of place at the epicenter of the AIDS epidemic in New York City,” said Ken Lustbader, co-director of the NYC LGBT Historic Sites Project Historic Preservation. “Memorializing the devastation and bravery of the AIDS epidemic, and naming the park in this very appropriate way, will enable all visitors to reflect on this important history and its impact on our city.”

“Along with the move to commemorate Stonewall and its nearby park as a national landmark, the NYC AIDS Memorial Park at St. Vincent’s Triangle is a critical marker of our shared history,” said Stephan Jaklitsch, architect and Greenwich Village resident.

“It is appropriate that this is in our neighborhood and that the park’s name reflects both the epidemic and the location of the hospital that was so critical during the height of the AIDS epidemic in NYC. But it is also a memorial that addresses all of our society,” Jacklitsch continued. “It is impossible to convey the horror of such an epidemic and the injustice and stigma experienced by those directly affected, but public memorials serve as important reminders of our history, our shared values and the actions and attitudes we put forth as a public body during moments of crisis. This memorial should serve, in future epidemics, both as a reminder of the dangers created, when we allow fear to rule, and of the positive outcomes that result when we unite to fight discrimination and seek solutions to our common ills.

“Recent events show how relevant and timely this memorial can be.”

The memorial, designed by architecture firm Studio a + i, includes a metal canopy, made up of connected triangles, and an installation on the ground by artist Jenny Holzer, which includes a quote from the Walt Whitman poem “Song of Myself.”

Walt Whitman | Song of Myself