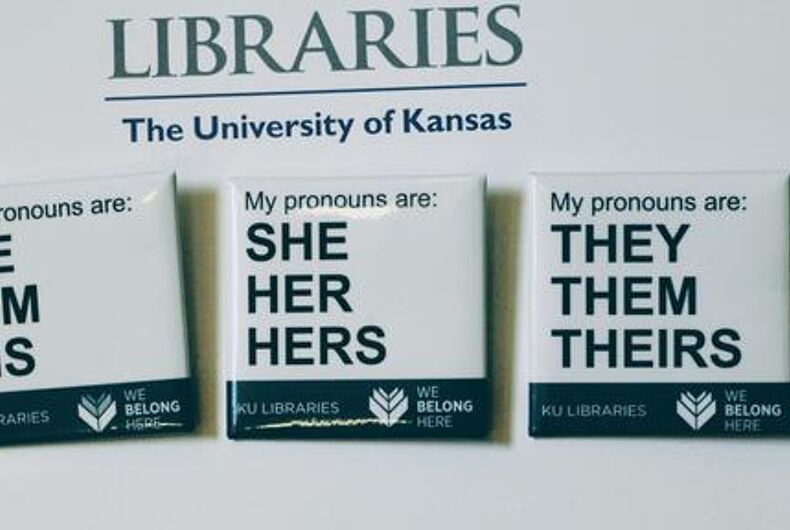 In this Tuesday, Dec. 27, 2016 photo, buttons advertising part of the University of Kansas Libraries' "You Belong Here" campaign are displayed in Lawrence, Kansas. The campaign is aimed at making undergraduates, including those who are transgender, feel welcome. A number of University of Kansas Libraries employees now wear the buttons showing their gender pronouns. Photo: Sara Shepherd /The Lawrence Journal-World via AP

LAWRENCE, Kan. (AP) — University of Kansas students are being offered buttons through the school’s library system meant to make their gender pronouns clear.

Library leaders say the buttons are part of the library system’s “You Belong Here” marketing effort meant to lure undergraduates and ensure that they feel welcome, including transgender students.

The buttons come in three versions: “He him his,” ”She her hers” and, for people who don’t identify themselves as male or female, “They them theirs.”

“Because gender is, itself, fluid and up to the individual,” a sign at the libraries reads. “Each person has the right to identify their own pronouns, and we encourage you to ask before assuming someone’s gender. Pronouns matter! Misgendering someone can have lasting consequences, and using the incorrect pronoun can be hurtful, disrespectful, and invalidate someone’s identity.”

Expressing gender identity through buttons or other means has cropped up elsewhere in the interest of inclusion. Buttons were given out at the start of this semester at Vermont’s Champlain College, home to a new Women and Gender Center. Students and teachers at the University of Vermont also have worn name tags and made business cards with their pronouns. The University of Michigan this semester began letting students designate their own pronouns that will be reflected on class rosters.

At Kansas, library workers can choose whether they want to wear them, said Rebecca Smith, the library system’s chief of communications and advancement.

Extra buttons are available at some library counters, and the libraries have reordered them at least once to keep up with demand, Smith said.

“We’ve told all of our front-line employees, if a student asks, give them a button,” Smith said.

“A commitment to support the voices of marginalized people is part and parcel to the libraries’ commitment to the values of the First Amendment,” added Kevin Smith, the university’s libraries dean who is not related to Rebecca Smith.

How LGBTQ people and Jews were stereotyped as violent predators