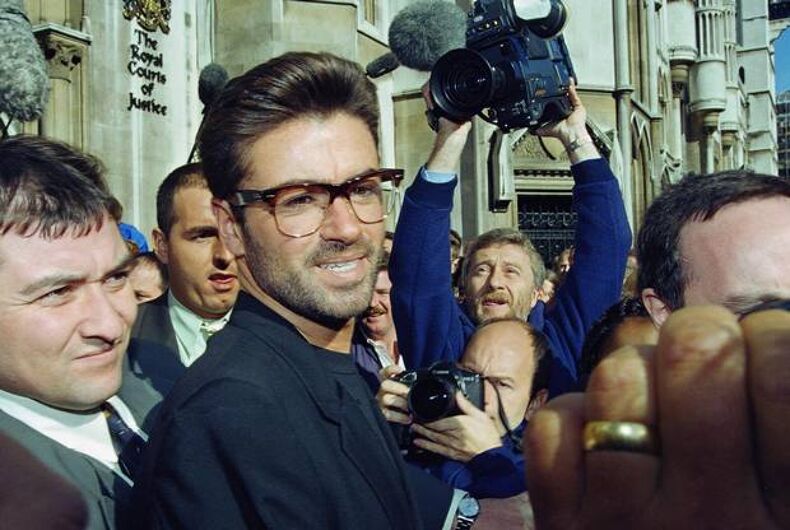 George Michael, 30, arrives at the Royal Courts of Justice in London at the start of his court action against Sony Music Entertainment Oct. 18, 1993.Photo: Alistair Grant/Associated Press

George Michael spent years in the closet, not only keeping his orientation from the public but also from many of those closest to him, including his manager.

Michael, who passed away on Christmas at the age of 53, struggled for years with his celebrity and only came out when forced to at 34, due to his infamous arrest by an undercover cop in a public restroom.

“There were times when he would have a good time with his crew and staff during the day,” Michael’s publicist Phil Lobel told the Daily Mail. “But there were other times when the loneliness would show – he would basically retreat to the privacy of his own world and be alone.

“I didn’t find out why George was so reticent and didn’t really want to give interviews until very late on in the tour and it was because at that time, he was very much in the closet.

“He was very unhappy for a lot of the tour because of that and because of it, he would go back to his room after those amazing sold-out Faith shows and be alone.”

Even as a closeted man, Michaels experienced homophobia.

While on the Faith tour, he and some friends went to a hotel pool, wearing Speedos. A young mother accused the group of probably having AIDS, pulling her children out of the water.

He said later that he did not come out in part because of his concern that his mother would fear he would have been subjected to HIV/AIDS.

He also feared for his career.

“I never asked George, ‘Are you gay?’ Lobel said. “It wasn’t my place to ask. It’s a decision everybody needs to make themselves. But I realized towards the end of the tour.

“It was about two months before the end and we were in this hotel in Texas. The manager [Lippman] suddenly asks me, ‘Phil, do you think George is gay?’

“I was incredulous – I looked at him and said, you’re George’s manager and you don’t know? He goes, ‘No. George has never spoken to me about it, he’s never spoken to anyone about it – his dating, sexuality or a.nything like that.’

“So if he is, he’s totally in the closet and that’s why he’s so unhappy touring and on the road – because he’s so very alone.

“I thought that was kind of sad because by that point, we’d been on the road for almost a year.”

Lobel said he admired “how much he gave to a community that he ignored in the beginning, which was the gay community and those with AIDS and HIV.”

“Everybody that worked with George was both enamored by him, in awe of his creative talents and enjoyed his company,” he added. “And the fact we lost him at such an early age – it’s a tragedy.”