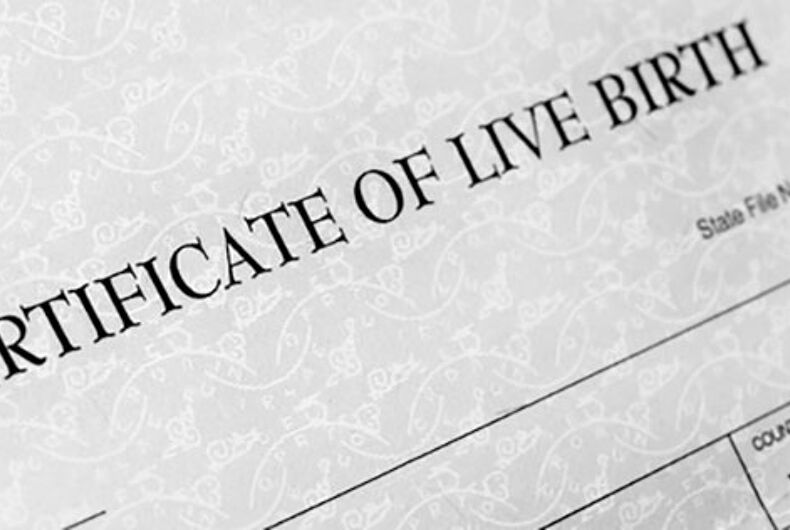 Arkansas’ highest court on Thursday threw out a judge’s ruling that could have allowed all married same-sex couples to get the names of both spouses on their children’s birth certificates without a court order, saying it doesn’t violate equal protection “to acknowledge basic biological truths.”

The state Supreme Court also issued a rare admonishment to Pulaski County Circuit Judge Tim Fox, saying he made “inappropriate remarks” in his ruling that struck down the birth certificate law. Fox had cited the U.S. Supreme Court’s decision legalizing gay marriage in his ruling last year that said married same-sex couples should have both names listed on their children’s birth certificates, just as heterosexual married couples do, without requiring a court order.

In the state Supreme Court’s decision Thursday, the justices sided with the state attorney general’s office, saying Arkansas has a vested interest in listing biological parents on birth certificates.

Cheryl Maples, who sued on behalf of three same-sex couples, said she hasn’t decided yet whether to appeal to the U.S. Supreme Court. The three couples who sued were allowed to amend their children’s birth certificates last year under a ruling issued by Fox.

“There’s no requirement that DNA be given or that there be a biological relationship to a child to get on a birth certificate for a father, for the non-birth parent,” she said. “All you have to do is legitimize the child and you’re entitled, if you’re heterosexual. This is wrong.”

Judd Deere, a spokesman for Arkansas Attorney General Leslie Rutledge, said the state is “gratified” by the court’s decision.

“If any changes are appropriate it is the job of legislators to do so, not the circuit court,” he said.

“There can be no reasonable dispute that the inclusion of a parent’s name on a child’s birth certificate is a benefit associated with and flowing from marriage,” Danielson wrote, adding that the U.S. Supreme Court decision legalizing gay marriage “requires that this benefit be accorded to same-sex spouses and opposite-sex spouses with equal force.”

The birth certificate issue was the first major case surrounding gay marriage for the Arkansas court since an unusually public split among justices last year over its handling of a lawsuit over Arkansas’ same-sex marriage ban. The court dismissed the gay marriage lawsuit hours after the U.S. Supreme Court legalized same-sex marriage nationwide.

Six months after massacre, Pulse to reopen for ‘Remembering Our Angels’ memorial