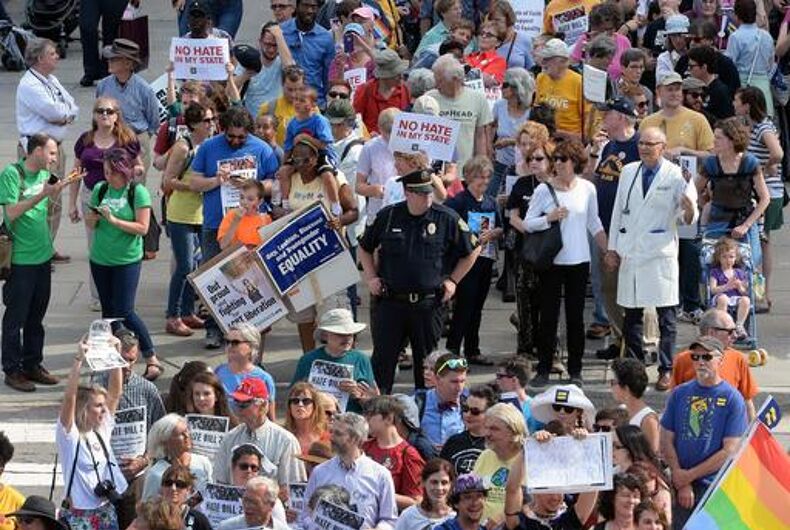 Long perceived as a progressive Southern state, the rest of the nation finally discovered that a takeover of state politics by GOP lawmakers had pushed North Carolina to the far-right. The state found itself in the spotlight over a number of issues including LGBT rights, voting rights, redistricting and most recently an unwillingness to let the state’s new Democratic governor keep the same powers that the outgoing Republican governor had.

As the nation woke up to these changes in Raleigh, national and state groups fought aggressively against the Republicans’ highest-profile action this year – the passage of what most people know as House Bill 2, which limits LGBT protections and orders transgender people to use bathrooms and locker rooms in government buildings that align with their sex at birth.

Gov. Pat McCrory and legislative leaders sought to defend the bill as common sense legislation to protect women and girls’ privacy, while businesses, organizations and entertainers boycotted the state to protest what they saw as an unprecedented attack upon the rights of LGBT citizens. The law has cost the state hundreds of millions of dollars and – perhaps as damaging – its reputation as a friendly and inclusive state.

Last week, a last-minute deal to repeal the bill was shot down by lawmakers.

These are four other stories that made headlines in North Carolina in 2016.

2016 could very well go down as one of the biggest years for voters in the state’s history, as much for the unprecedented fights over voting rights that occurred both before and after the November election as for those the state elected.

In July, a federal court delivered a major blow to the legislature when it overturned parts of its signature elections law, saying lawmakers had disproportionally targeted black voters. That ruling forced the state to draw up new rules for early voting.

Following this ruling, many county elections boards controlled by the GOP tried to shorten their early voting hours to the dismay of voting rights advocates who accused them of trying to get around the court’s ruling. The State Board of Elections forced several counties to increase the number of hours and weekend dates above what local boards wanted.

After the election, Republicans challenged votes cast in dozen of counties while trying to see if they could eat into Governor-elect Roy Cooper’s narrow lead over McCrory. Most of the challenges were thrown out or set aside.

One of the keys to Republicans expanding their control was their redrawing of state’s political boundaries following the 2010 census.

But in 2016 federal courts ordered the maps that legislators drew for the state’s congressional districts and its House and Senate districts be redone. In both cases, the judges ruled the state had drawn illegal racial gerrymanders, which the maps’ challengers argued diluted the overall power of black voters.

For voters it meant a delay in the state’s congressional primary elections and uncertainty over whether the redrawn districts will remain in place. This case is currently being considered by the U.S. Supreme Court.

As for the General Assembly districts, a three-judge federal panel directed lawmakers to redraw them by March 15 and hold a special election using the new maps next November, despite GOP arguments the off-year election is not necessary.

In September, Charlotte became another flashpoint in the continuing friction between police and the nation’s African-American community when the fatal shooting of a black man by an officer sparked protests and rioting.

For several nights, protesters marched through the city’s downtown and blocked streets and highways. One man was shot and killed during the worst night of the protests when glass storefronts and windows were smashed.

The district attorney for Charlotte determined that all of the officers in the incident, including the one who pulled the trigger, acted in a proper manner and none of them were charged with a crime.

The family of the victim, Keith Lamont Scott, is still deciding if they will pursue further legal action.

North Carolina was supposed to get the tail end of Hurricane Matthew as it bore down on the east coast in early October but instead ended up taking the brunt of its rainfall.

More than a foot of rain inland triggered massive flooding in eastern and southeastern North Carolina that numerous communities and thousands of people are still trying to recover from. Authorities said there were 28 storm-related deaths.

Meanwhile, across the state a widespread drought lead to the outbreak of wildfires that scorched tens of thousands of acres in North Carolina’s mountains and forced people to evacuate for more than a week in some areas. Authorities say at least some of the fires were intentionally set and are still investigating.

© 2016, Associated Press, All Rights Reserved.
This material may not be published, broadcast, rewritten, or redistributed.

Editor’s note: Pat McCrory is in the running as our 2016 Person of the Year. Vote here, now through Dec. 31.

The pride flag’s big year, from burnings to flying high