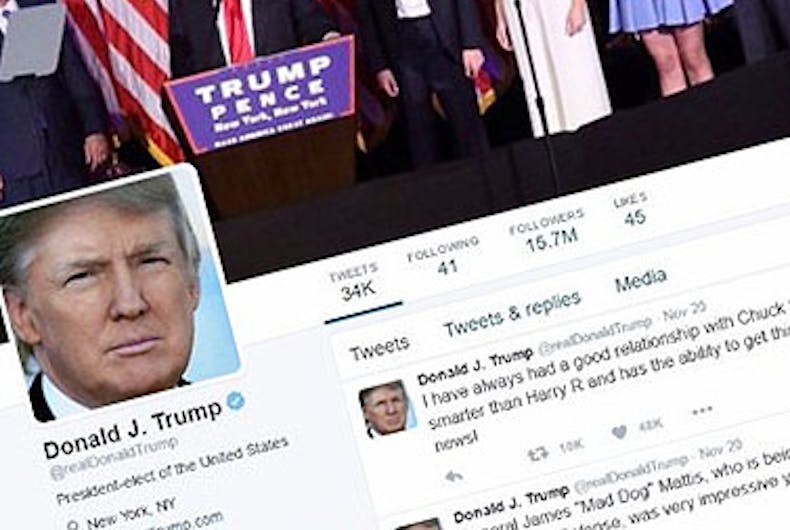 While infatuated with the 2nd Amendment of the U.S. Constitution, Donald J. Trump seems not to have any affinity for the 1st.

Not only has he attacked and threatened the press, demonstrated disdain for people’s right of assembly (especially when demonstrating against him), proposed to restrict entry into the United States of people from Muslim-dominated countries and enact a “Muslim registry” composed of those already here, he seems also not to value our freedom of speech. We will know only too well and too soon his response to our right to petition the government for redress of grievances after he and his administration take office.

He has consistently showed his hand, or at least his thumbs, in his tweeting rants and admonitions, which portends a very bleak future for free speech in Trump’s increasingly Un-united States.

In a recent tweet, Trump directed his ire against the cast of the Broadway musical “Hamilton: An American Musical,” and indirectly at Actor Brandon Victor Dixon who plays Aaron Burr.

With Vice President-elect Mike Pence in attendance, at the end of the performance, the entire cast reassembled on stage to read a message expressing their anxiety over the election of Donald Trump.

As Pence attempted to exit the theater, Brandon Victor Dixon requested that he remain to “hear us just a few more moments.” Dixon, very courteously and respectfully thanked Pence for coming to the show, and expressed to those in the crowd who had disparaged Pence’s presence that “there’s nothing to boo here, we’re all here sharing a story of love.”

Reading from the stage, Dixon continued: “We are the diverse America who are alarmed and anxious that your new administration will not protect us, our planet, our children, our parents, or defend us and uphold our inalienable rights, sir. But we truly hope that this show has inspired you to uphold our American values and to work on behalf of all of us. We truly thank you for sharing this show, this wonderful American story, told by a diverse group of men, women, of different colors, creeds, and orientations.”

Trump’s “theater” tweet came a week after he reacted on the Twittersphere to the numerous, largely peaceful, demonstrations throughout the country protesting his election. He implied that people were paid for taking part in these actions:

Just had a very open and successful presidential election. Now professional protesters, incited by the media, are protesting. Very unfair!

His reaction to the cast’s message stands as more-than-ironic, since he and his entire Bannon-inspired and -instigated campaign has created a Ford’s Theater climate in the country against anyone and everyone who do not represent and live up to the mythical though promoted standard of “an American”: white, preferably male, mainline Protestant, financially secure, able-bodied, heterosexual, cisgender, native-born and English-as-first-language speaking, European-heritage, gun-loving, socialism-hating, anti-reproductive freedom, anti-marriage equality, and, of course, anti-mainstream “elite” media, and the list continues ad infinitum. Regarding Trump’s standard of women, one must also conform to the youthful and super-model svelte image.

Trump has “promised” to turn back many of the gains progressives have made in civil and human rights over the decades. Many groups have very real concerns for their emotional and physical safety while the bully-in-chief gives permission to others by his example to trample of people’s basic Constitutionally-protected guarantees.

When Trump feels that he needs to react to the cast of a Broadway show, when he feels he needs to react to people taking to the streets in largely-peaceful protest, how does Trump intend to act/react when his current bro-crush Vladimir Putin shows Trump the side of himself that he demonstrates to his political rivals in Russia and abroad, and when he invades neighboring countries as he has already done in Ukraine and Georgia?

How does Trump intend to act/react when the people who voted for him begin to turn on him as they inevitably come to understand that beneath the bluster and hyperbole, the emperor has no clothes?

Throughout the general election, Hillary Clinton was on target in questioning Trump’s temperament regarding his ability to serve as our Commander in Chief.

Under a Trump presidency, Ford’s Theater will travel to your community, wherever you live. The price of admission is the mandatory relinquishing of your freedom and liberty, and available only to those of us who fall outside the mythical norm of “an American.”

4 Steps to being a better transgender ally this Thanksgiving

No, Donald Trump, Elton John is not singing at your inauguration