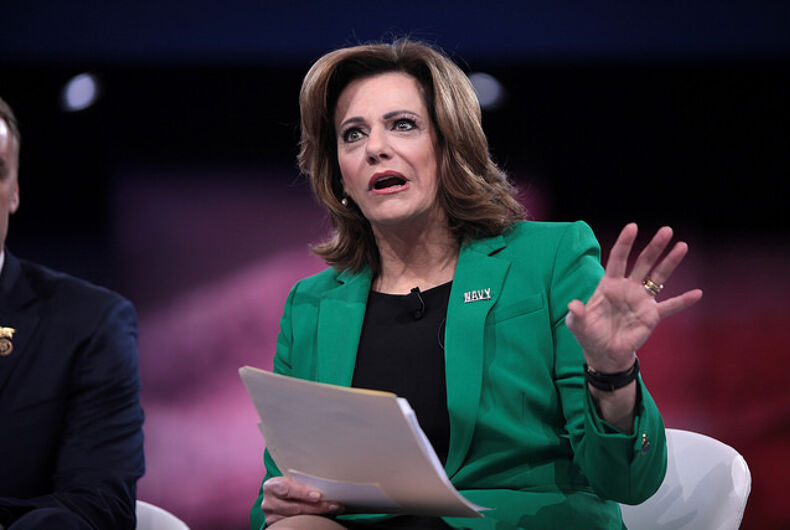 Donald Trump has selected Kathleen Troia “KT” McFarland as deputy national security adviser, who outed her gay brother while he was dying due complications related to AIDS to her parents, as well as accusing her father of abuse the rest of her family denies.

“I am proud that KT has once again decided to serve our country and join my national security team,” Trump said in a statement on Friday. “She has tremendous experience and innate talent that will complement the fantastic team we are assembling, which is crucial because nothing is more important than keeping our people safe.”

McFarland last served as a Pentagon official in the Reagan administration. She currently works as a Fox News commentator and sits on the board of the Washington, D.C.-based research and analysis institute the Jamestown Foundation.

McFarland ran unsuccessfully to unseat Hillary Clinton in the U.S. Senate in 2006. A profile by The New York Times that year explored some painful familial territory. Namely, her gay brother, whose sexual orientation she would not accept.

The Times discovered a letter McFarland wrote to her parents in 1992 where she reportedly outed her brother, Michael, and blamed her father for his present state in life.

“Have you ever wondered why I have never had anything to do with Mike and have never let my daughters see him although we live only fifteen minutes away from each other?” McFarland wrote in the letter. “He has been a lifelong homosexual, most of his relationships brief, fleeting one-night stands.”

When asked about her brother in the profile she simply said, “Ummmm. He was sick and then he died.”

When news of the letter went public after the piece in The Times, and with advisers reportedly concerned she would appear homophobic, McFarland attempted to explain the situation further, alleging abuse from her father.

“In seeking to put a painful past behind me, I wrote two candid letters to my parents in 1992 at the advice of a counselor. Now, in the midst of a political campaign, those letters have found their way into the hands of a magazine reporter,” she said in a statement. She also granted another interview with The Times.

She said her father had whipped her with belts, starting at age two, as well as her brother, and that he had waved a gun in her face and threatened to kill the family.

She admitted to cutting her brother out of her life when she learned he was HIV-positive, and keeping her children from him, but adding that she loved him and regretted not spending more time with him.

“But I was increasingly concerned because he talked about a very promiscuous lifestyle. And it saddened me a great deal,” she said.”

Her parents deny the allegations of abuse, and her other brother,  although he does acknowledge they were spanked, also says her recounting of the situation was inaccurate. He called the spanking they received in line with the norms of the time.

He also had some harsh words for his sister.

“If I had one word to describe my sister, it would be ‘evil,'” he told the New York Post.

When contacted by the Washington Blade, the Trump transition team had no comment as to whether McFarland’s “views on gay people have changed or whether the president-elect is OK with the way she treated her brother.” McFarland also did not return a request for comment from the publication.

They also note that her relationship with her brother is not the only controversial issue in her past:

At the time of her Senate bid, the New York Post reported McFarland maintained two voting addresses in the period between 1996 to 2006, which could be a felony. Additionally, McFarland claimed helicopters were flying over her home taking pictures and were sent by Clinton because she was so worried about the challenge to her seat, although McFarland later said she was joking.

As a Defense Department official, McFarland also was accused of exaggerating her contribution to President Reagan’s “Star Wars” speech and her claims of being the highest-ranking woman in Reagan’s Pentagon. The latter was demonstrably not true because there were two other women with ranks higher than hers.

While the Log Cabin Republicans noted their opposition to outing, they threw their support behind McFarland.

“Log Cabin Republicans opposes outing, and always has,” Angelo said. “Beyond that, family matters should be left to families to work out. All I can say is that my interactions with KT over the years — and there have been many, from my time as chairman of Log Cabin Republicans of New York State to CPAC to today — have always shown me KT supports a big-tent approach to politics.”

The group had failed to endorse Trump during the election because of he had chosen to surround himself with anti-LGBTQ advisers, such as his running mate Mike Pence.

McFarland joins other members of the cabinet who have concerning histories when it comes to LGBTQ rights.

Senior fellow at the Family Research Council Ken Blackwell, a man who has said homosexuality is a lifestyle choice that can be changed, was named to the transition team.

His pick for Secretary of Education, Betsy DeVos, headed the effort to amend Michigan’s constitution to ban same-sex marriage, along with her husband Richard, Raw Story reports. The couple gave $200,000 to the campaign.

Sen. Jeff Sessions, who has been named Attorney General, voted for a constitutional ban on same-sex marriage and against hate crime legislation and has received a zero rating from the Human Rights Campaign.

Trump’s chief strategist Steve Bannon, meanwhile, has called progressive women “a bunch of dykes” and oversaw Breitbart while it was publishing anti-LGBTQ articles.